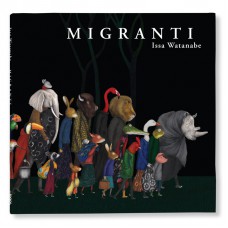 At night, a group of animals sets on a journey through the woods with a few suitcases and other essential belongings. A solitary and melancholy character, the only one with human features, follows them from afar. The animals accept her gentle presence and move forward on their path, protected by the secrecy of the night. Every time they stop to rest, they repeat the everyday actions they used to perform when they were still at home.

Then they get to the border and run to take a boat that will bring them even further away. Hope sustains them, danger awaits them. The solitary character is always there, ready to take those who don’t make it into her kind arms…

The extraordinary strong illustrations of this silent book tell a story that keeps happening every day: the hardship of travel, the danger and uncertainty that millions of people are forced to endure to pursue the hope of a better life. A bluntly told story that, with poetry and tact, encourages us to empathise and show solidarity to its characters. War, borders, exodus, human rights… are the words we read on the back cover, the words we use every day to talk about migration and that too often get lost in a thousand speeches and the resulting silence of those who could do something about it.

The illustrator:
Issa Watanabe was born in Lima in 1980. Her family passed down to her the love for art and literature (her mother was an illustrator herself and her father was a poet), so she studied literature at the Universidad Católica in Lima and then moved to Mallorca to attend illustration courses at the Academy of Fine Arts. She developed and directed various projects to promote social integration through art, for which she was awarded the Obra Social prize in 2012 by La Caixa Forum. She published many illustrated books, among which Más te vale, mastodonte, the winner of the 17th contest “A la Orilla del Viento” organised by Fondo de Cultura Económica Mexico.