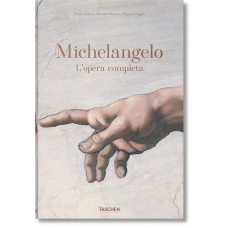 Before reaching the tender age of 30, Michelangelo Buonarroti (1475–1564) had already sculpted David and Pietà, two of the most famous sculptures in the entire history of art. His achievements as a sculptor, painter, draftsman, and architect are unique—no artist before or after him has ever produced such a vast, multifaceted, and wide-ranging œuvre. This is demonstrated not only by the frescoes of the Sistine Chapel but also by Michelangelo’s monumental sculptures and his unconventional architectural designs, whose forms went far beyond the accepted vocabulary of his day. Such was his renown that Michelangelo was the subject of two biographies during his lifetime.

This comprehensive tome explores Michelangelo’s life and work in more depth and detail than ever before: his life is exposed via an copiously illustrated biographical essay, and his extensive work is presented in four parts providing a complete analytical inventory of Michelangelo’s paintings, sculptures, buildings, and drawings. Gorgeous full-page reproductions and enlarged details bring readers up close to the works. This sumptuous book also takes account to a previously unseen extent of Michelangelo’s more personal traits and circumstances, such as his solitary nature, his thirst for money and commissions, his miserliness, his immense wealth, and his skill as a property investor. In addition, the book tackles the controversial issue of the attribution of Michelangelo drawings, an area in which decisions continue to be steered by the interests of the art market and the major collections.

This is the definitive work about Michelangelo for generations to come, and as an extra the slipcase converts into a book stand so that this tome can be put on display.

The editor and author:
Frank Zöllner wrote his doctoral thesis on motifs originating from Antiquity in the history of art and architecture of the Medieval and Renaissance periods (1987). He is also the author of a postdoctoral treatise on motion and expression in the art of Leonardo da Vinci, published in 2010. He has published numerous works on Renaissance art and art theory, and on 20th-century art. Since 1996 he has been Professor of Medieval and Modern Art at the University of Leipzig. For TASCHEN he has authored the XL monographs Leonardo da vinci. Tutti i dipinti e disegni and Michelangelo
The contributing authors:
Christof Thoenes studied art history in Berlin and Pavia, before completing his doctorate in Berlin. Thoenes was Honorary Professor in Hamburg and now lives in Rome, where for many years he has worked for the Bibliotheca Hertziana (Max-Planck-Institute). He has contributed to numerous publications on Italian art, particularly on architecture and architectural theory of the 15th to 18th centuries.

Thomas Pöpper wrote his doctoral thesis on 15th-century Italian Renaissance sculpture (2003). After a fellowship at the Bibliotheca Hertziana, he worked as a volunteer for the Schleswig-Holsteinische Landesmuseen. Following further appointments at universities in Hamburg und Leipzig, since 2008 he has been Professor of Art and Design History at the West Saxon University of Applied Sciences of Zwickau, where he is currently Head of the Faculty of Applied Art. Pöpper has published on a variety of aspects of Italian art from the Middle Ages to the Baroque, German painting of the Early Modern era and German sculpture of the 19th and 20th century.

MICHELANGELO. THE COMPLETE PAINTINGS, SCULPTURES AND ARCHITECTURE
15.00€
Add to Cart