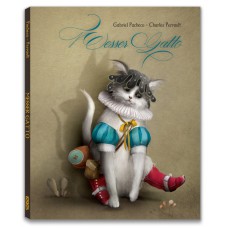 A miller dies leaving his sons a meager inheritance: a mill, a donkey, and a cat. His youngest, who only gets the cat, is in despair; but the smart feline reassures him: «Do not be so concerned, my good master. If you will but give me a bag, and have a pair of boots made for me, that I may scamper through the dirt and the brambles, then you shall see that you are not so poorly off with me as you imagine. »
This is how the traditional European fairy tale widely known as Puss in Boots begins in the famous version by Charles Perrault, here translated from the very first French edition Maistre Chat, as it appeared in the volume Histoires ou Contes du temps passé (1697).
This new translation is presented alongside the gorgeous images by the Mexican illustrator Gabriel Pacheco, now at his fifth publication with #logosedizioni. From a visual point of view, we may say that this is a book made of silver and gold; perhaps an allusion to richness, which is one of the underlying themes of the tale, together with cleverness. Indeed, this story shows that fortune is not exclusively heritable: it can be obtained with the help of the intellect, which is the only richness required to conquer the respect of a king and the heart of a princess. The vibrant turquoise and golden elements pop against the gold or silver backgrounds of the pictures, where neutral and cool tones prevail. The two-dimensional and stylised characters, as well as all the natural and architectural elements, stand out from the background with a collage effect. This book overflows with wonderful and refined details, such as the embroidery of the clothes and the architectural geometries, recalling the engravings by Giovanni Battista Piranesi, as well as the natural motives of the plant kingdom.
Enjoy the magic of a timeless fairy tale in this unique interpretation by Gabriel Pacheco.

L’illustratore:
Gabriel Pacheco was born in Mexico City in 1973. He graduated in set design at the Escuela Nacional de Teatro del INBA and further studied the human figure at the Escuela Nacional de Artes Plásticas. He has been awarded many important international prizes, such as a special mention in the category “New Horizons” at the 2009 Bologna Children’s Book Fair with Hago de voz un cuerpo. This book, included in the prestigious catalogue of the American Institute of Graphic Arts 50 books/50 covers and considered one of the best books for children by the Banco del Libro de Venezuela (2008), was also awarded a “Silver mention” at the Premios Quórum by the Consejo de Diseñadores de México.
He has also been selected – among others – by the Bologna Children’s Book Fair (2007 and 2008), Ilustrarte 2007 (Portugal), and the Blue Book Group (Iran).
He has also published the following titles by #logosedizioni: Il grande viaggio, L'Aggiustacuori, La strega e lo spaventapasseri, Tre desideri e Messer Gatto.