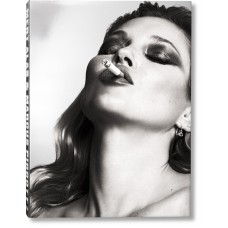 Mert Alas, born in Turkey, and Marcus Piggott, born in Wales, met in 1994, at a party on a pier in Hastings, England. Piggott asked Alas for a light, the pair got talking, and rapidly discovered they had plenty in common, not least a love of fashion. Three years later, the duo now known as Mert and Marcus had moved into a derelict loft in East London, converted it into a studio, and had their first collaborative photographic work published in Dazed & Confused.
These days, Mert and Marcus shape the global image of such renowned brands as Giorgio Armani, Roberto Cavalli, Fendi, Miu Miu, Gucci, Yves Saint Laurent, Givenchy and Lancôme, and public figures including Lady Gaga, Madonna, Jennifer Lopez, Linda Evangelista, Gisele Bündchen, Björk, Angelina Jolie, and Rihanna. Their photographs encompass a wide range of styles and influences but are renowned particularly for their use of digitized augmentation of images, and a fascination for strong, sexually charged, confident female subjects: “powerful women, women with a meaning, a you-don’t-have-to-talk-or-move-too-much-to-tell-who-you-are kind of woman.”
Designed in collaboration with Giovanni Bianco, this Limited Edition explores the unique vision of a creative partnership that has defined and redefined standards for glamour, fashion, and luxury. Approximately 300 images from the megawatt Mert and Marcus portfolio are accompanied by an introduction by Charlotte Cotton.

Limited Collector’s Edition of 1,000 copies, each numbered and signed by Mert Alas and Marcus Piggott.

“One of the most influential photographic practices in contemporary fashion.” — Vogue, London

The author:
Charlotte Cotton is a curator and writer. She was head of the Wallis Annenberg Department of Photography at the Los Angeles County Museum of Art (2007-2009), curator of photographs at the Victoria and Albert Museum (1992-2004) and the head of programming at The Photographers Gallery (2004-2005) in London. She is also the founding editor of wordswithoutpictures.org.

PETER LINDBERGH. SHADOWS ON THE WALL
80.00€
Add to Cart