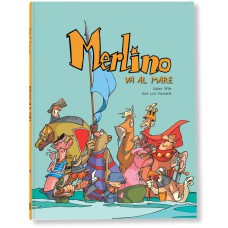 After the tiring adventures with Princess Viviana and Santa Claus, in this third volume of the series Merlin takes a well-deserved break and, together with his two friends, he goes on holiday at his grandfather’s house, on the cold and rainy English Channel coasts. The venerable relative is not an ordinary grandfather: he is none other than the Fisher King, the keeper of the Grail! Actually, the beach is not an ordinary beach either: it is the beach of Hastings, which – right on time for the three friends’ holiday – happens to be invaded by William the Conqueror. In a blaze of swirling chases and bloody battles, with the help of the rightful king of England, Harold, the three friends will manage to get the holy Grail back and to push the invader away. It seems like the Bayeux Tapestry did not tell the whole truth…

The author:
Born in Nizza in 1971, Joann Sfar is a prolific and talented author of comics, who skilfully deals with both drawing and script. In 1994 he published his first comic book, Les Aventures d’Ossour Hyrsidoux, and since 2000 he has achieved growing appreciation from audience and critics alike, winning several prizes. He collaborates with the press, illustrates philosophical classics and has written several comic books, many of which have been translated into Italian. His titles published in English include Klezmer: Tales of the Wild East, Vampire Loves, the six volumes of Sardine in Outer Space, The Professor’s Daughter, The Rabbi’s Cat, Little Vampire, Dungeon and The Little Prince. In 2004 he won the Grand Prix de la ville d’Angoulême, special award for the thirtieth anniversary of the festival. In 2010 he directed the musical Gainsbourg (vie héroïque), adapted from his graphic novel and awarded with three César awards. In 2011 he directed the animation movie Le Chat du Rabbin, an adaptation from his comic book series with the same title and nominated as the best animation movie at the European Film Awards.