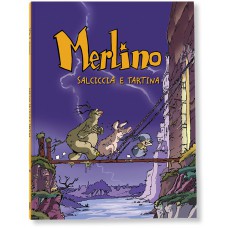 In this first volume of the Merlin series, the protagonist, a tiny boy with a hat that is definitely too large, meets Salciccia and Tartina, at risk of being devoured by the latter, and the very annoying Princess Viviana, who adores poisonous mushrooms but hates the poor. The princess has long been sleepless, because her powerful father, King Noctiflorio, always fills her mattress with peas to make sure she is really his daughter. The three friends decide to kidnap the princess in order to teach her to respect the poor, so they enter the castle on the eve of the agony of Julio the Ecclesiastes, an unmissable show with an unmissable selection of exhilarating tortures, offered by the Rìbocche slippers. After all, as Salciccia reminds us, "it's the Middle Ages"! The kidnapping does not seem to be successful, but fortunately Meripoppi, the gentle witch, who sees the future and the past (and sometimes the imperfect subjunctive), manages to put things right.

AWARDED AS THE BEST ILLUSTRATED BOOK FOR CHILDREN AT THE SIERRE AND COLOMIERS FESTIVALS.