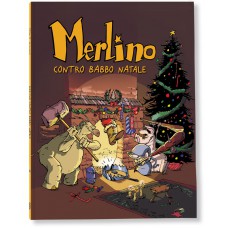 This second volume of the adventures of Merlin opens up on a Christmas evening many years ago, when even Santa Claus was still a boy. Terrified by the ogre Tartina, the poor little boy – who went down the chimney of the house to deliver his gifts to thre three friends and got caught in one of the several traps they have wisely arranged – continues to lose consciousness. To make him recover, Merlin prepares a magic potion, but the result is rather strange: first of all, the potion lacks salt and to make matters worse it turns the small and sweet Santa Claus into a horrible and gigantic monster, hungry for baby meat. The solution seems at hand: Tartina swallows the rest of the potion to become even bigger and crueller, in order to face the new evil Santa. Alas, something goes wrong: the potion seems to work according to its own will! Between horrifying gatherings of ogres, unexpected transformations and a taste of turbocapitalism, in the end – but only in the end – everything works out for the best, and Santa receives his reindeers as a gift and an army of devoted elves ready to help him every time he needs them!

The author:
Born in Nizza in 1971, Joann Sfar is a prolific and talented author of comics, who skilfully deals with both drawing and script. In 1994 he published his first comic book, Les Aventures d’Ossour Hyrsidoux, and since 2000 he has achieved growing appreciation from audience and critics alike, winning several prizes. He collaborates with the press, illustrates philosophical classics and has written several comic books, many of which have been translated into Italian. His titles published in English include Klezmer: Tales of the Wild East, Vampire Loves, the six volumes of Sardine in Outer Space, The Professor’s Daughter, The Rabbi’s Cat, Little Vampire, Dungeon and The Little Prince. In 2004 he won the Grand Prix de la ville d’Angoulême, special award for the thirtieth anniversary of the festival. In 2010 he directed the musical Gainsbourg (vie héroïque), adapted from his graphic novel and awarded with three César awards. In 2011 he directed the animation movie Le Chat du Rabbin, an adaptation from his comic book series with the same title and nominated as the best animation movie at the European Film Awards.