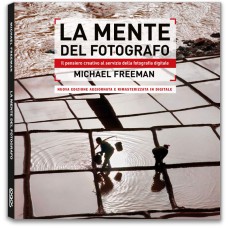 The source of any photograph is not the camera, or even the scene through the viewfinder — it is the mind of the photographer: this is where an image is created before it is committed to a memory card or film. In The Photographer’s Mind, photographer and author Michael Freeman unravels the mystery behind the creation of a successful photograph.
Learn to Surprise. More than any other art form, the nature of photography demands that the viewer constantly be intrigued and surprised by new imagery and different interpretations.
Be Great, Consistently. The aim of this book is to explain what makes a photograph great, and explore the ways that top photographers achieve this goal time and time again.
Understand Composition. Freeman’s famous diagrams break down abstract concepts.
Delve Deep. Find invaluable knowledge on avoiding cliché, the cyclical nature of fashion, style, and mannerism, the nuances of light, and even how to handle the unexpected.

The Author:
Michael Freeman is perhaps the most widely published authority on photography in the world, not to mention a successful photographer in his own right. This recognition represents the wisdom that only four decades of editorial and commercial work can bring.  A graduate of Brasenose College, Oxford University, Freeman first worked in London’s advertising industry during the period of exciting change that took place in the 60s. In 1970, he made the life-changing decision to travel up the Amazon river with two second-hand cameras, and when many of the resulting pictures were published Time-Life, he chose to embark on a full-time photographic career.
Since then, Freeman has consolidated his reputation as one of the world’s leading reportage photographers, working for clients that include all the globe’s major magazines, most notably Smithsonian magazine (for which he has shot more than 40 stories). Of his many books, which have sold over 4 million copies worldwide, more than 60 titles are on the practice of photography. For this photographic educational work, he was awarded the Prix Louis Philippe Clerc by the French Ministry of Culture. Freeman’s books on photography, including L'occhio del fotografo, have been translated into 27 languages.