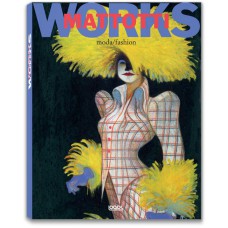 The second volume of the WORKS series by Lorenzo Mattotti. After the first volume dedicated to his pastels, this is a collection of his illustrations and sketches for the world of fashion.
Fashion illustrator for some of the most prominent Italian and international magazines in the 1980s and 1990s, in 1993 and 1994 Lorenzo Mattotti was sent to cover the Paris autumn fashion shows for The New Yorker, operating in real time as part of a special issue on fashion. The following autumn The New Yorker sent him to New York, to create the cover illustration for a new issue, an image now well-known all over the world in which he transformed the dress of the figure seen in close-up into a pavilion (recalling the tents set up in Bryant Park, which hosted the New York Fall Fashion Week).
In a feast of alluring reds, electric blues, warm hues of yellow and ochre, which according to the seasons leave place to delicate pastels or nocturnal atmospheres, a series of models walk down an imaginary catwalk as we leaf through the book – elegant, smart men and women, alone or in groups, but also images of young people that, for their clothes and attitude, seem to anticipate street photography. Besides documentary illustrations (very similar to runway photos) and more abstract images bordering on art (recalling metaphysical paintings, mosaics or art déco), the book includes a collection of black and white sketches that show the evolution of many artworks – changes affecting the hairdos, postures, composition, or maybe the removal or the addition of a different background. As we might expect from this kind of commissions, the attention to detail is very important, even more so regarding accessories and hairdos, and how textures and volumes are rendered: you feel you can almost touch the soft fur collars, the flat-ironed or backcombed hair, the voluminous skirts and the large shoulder pads of the typical 1980s women’s suits.
Fashion is a recurring topic in Mattotti’s oeuvre, who uses it to define the personality and the attitude of his characters, a topic reverberating in his graphic novels of the same period. Populated by smart, sophisticate women (L’uomo alla finestra), tramps with a shaved head (Stigmate), or relaxed men on a business trip (Lettere da un tempo lontano), in all his graphic novels the different socio-cultural contexts are depicted also through the fashion that defines them.
The volume features illustrations of designs by the great names of fashion (Vivienne Westwood, Jil Sander, Romeo Gigli, Enrico Coveri, Giorgio Armani, Kenzo, Jean Paul Gaultier…) and artworks for magazines such as Vanity (Condé Nast Italia), The New Yorker, Cosmopolitan, Playboy and Max, as well as advertising campaigns.