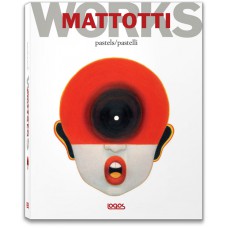 A catalogue of pastels selected from Mattotti’s vast output, a celebration of his unique colouring in 408 pages featuring 309 full bleed illustration. The book brings together illustrations for book covers, New Yorker issues, festival posters, calendars, commercial brochures, etc. The warm texture of the pastels and the evocative power of colour are the common features of very different works, showing the artist’s versatility as they guide us through his world, among portraits, indoor views, urban and natural landscapes, oneiric visions and surreal metaphors.
In these pages we recognize Mattotti’s most evident models, which the artist himself explicitly mentions: De Chirico, Morandi, Bacon, Hockney and other possible sources of inspiration, such as Munch, Picasso, Dalí. Isolated from the context for which they were originally conceived, these works are given a new life without losing their value and allow us to retrace the artist’s evolution from the 1970s onward, from his first graphic novels to the covers of the most prestigious magazines in the world.