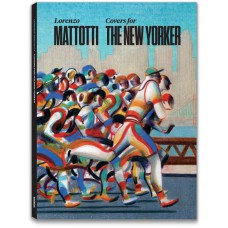 Lorenzo Mattotti. Covers for the New Yorker documents twenty years of collaboration between the most highly appreciated and best loved Italian illustrator and one of the most influential US magazines. This unprecedented volume collects the 32 covers drawn by Mattotti for The New Yorker, plus numerous  unseen preparatory sketches. The aim is to show the creative process behind the design of a prestige magazine cover, backed up by a precious essay by its art director Françoise Mouly, which describes her dialogue with the artist in the course of the latter’s long collaboration with the magazine. In this regard, some of Mattotti’s extraordinary pastels come with short texts recounting backgrounds and anecdotes about their creation.

In addition to the covers, the book offers a selection of the countless images created by Mattotti to illustrate articles for the same magazine: portraits of great personalities of cinema, literature, and art, such as Lana Turner, Gong Li, Konstantinos Kavafis, fashion specials (Mattotti was The New Yorker correspondent at the Paris fashion week fall 1994), and drawings illustrating complex current events.

The book, edited by Melania Gazzotti, also author of the biographical essay on the illustrator’s extraordinary career, was published to coincide with an exhibition hosted by the Italian Cultural Institute of New York from February 6 to March 8, 2018.