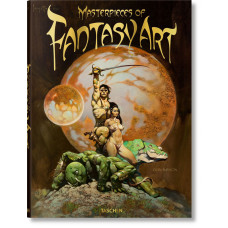 Fantasy art, that colorful blend of myth, muscle and sexy maidens, took off in 1923 with the launch of Weird Tales magazine, was reinvigorated in the 1960s with The Lord of the Rings, Conan the Barbarian paperbacks with Frank Frazetta covers, and the late ’60s emergence of fantasy psychedelia. It went big in the ’70s with the role-playing game Dungeons & Dragons, the brilliant French magazine Métal Hurlant, and the first Star Wars film. The number of active artists peaked in that decade, but a new generation of fans discovered the genre through fantasy trading card games in the ’90s, leading to a massive interest in the art form today. Frank Frazetta’s oil paintings—when they infrequently come to market—have sold for more than $ 5 million in recent years. Fans line up at Comic-Cons to meet Boris Vallejo, Rodney Matthews, Greg Hildebrandt, Michael Whelan, and Philippe Druillet, and memorialize dead icons HR Giger, Jeffrey Catherine Jones, and Frazetta. Imagine how eagerly they’ll welcome TASCHEN’s Masterpieces of Fantasy Art, including all the artists listed above and more.
This monster-sized tome features original paintings, contextualized by preparatory sketches, sculptures, calendars, magazines, and paperback books for an immersive dive into this dynamic, fanciful genre. Insightful bios go beyond Wikipedia to give a more accurate and eye-opening look into the life of each artist. Complete with tipped-in chapter openers, this collection will reign as the most exquisite and informative guide to this popular subject for years to come.

“It was likely the first art you really enjoyed, discovered on a comic book, paperback or record cover. You’d almost feel the blood vessels expanding in your brain as you absorbed the rich colors, the alien landscape, the idealized human figures.”
— Dian Hanson

The editor and author:
Dian Hanson produced a variety of men’s magazines from 1976 to 2001, including Juggs, Outlaw Biker, and Leg Show, before becoming TASCHEN’s Sexy Book Editor. Her titles include the “body part” series, The Art of Pin-up, Psychedelic Sex, and Ren Hang.