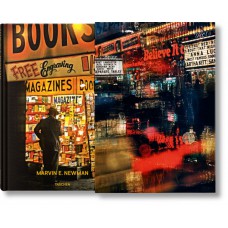 In 1952, after becoming one of the first-ever recipients of a Master of Science degree in Photography at Chicago’s Institute of Design, native New Yorker Marvin E. Newman returned to his hometown. Like many artists before, he set about chronicling the city. Unlike his predecessors, Newman chose color photography as the preeminent medium for capturing the people, landmarks, chaos, energy, and unique experience of 20th-century New York, and its emergence as the self-proclaimed “Greatest City in the World.”

Lauded by the likes of Eastman House, MoMA, and the International Center of Photography, Newman’s images remained, up until now, largely undiscovered beyond a prestigious collector and gallery circle. After featuring Newman in New York: Portrait of a City, TASCHEN now presents the artist’s first career monograph in a Collector’s Edition of some 170 pictures from the late 1940s through to the early 1980s.

The volume includes vivid tableaux across New York, as well as top shots from his sports photography portfolio for the likes of Life, Look, and Sports Illustrated, and images from the Midwest; Chicago; a vintage 1950s circus; a legalized brothel in Reno, Nevada; Las Vegas; Alaska; and the West Coast. From Times Square to Wall Street, Newman’s vivid, original tableaux offer fresh perspectives on familiar New York landmarks but, above all, a unique sense for life in the city and for the drama, extremities, and complexities that weld New York to so many hearts. Beyond New York, Newman applies the same flawless technique and humanist sensibility to other locations across the United States, providing memorable images that leave their mark on the eye and the soul.

At 89 years old, Newman, who is represented by the prestigious Howard Greenberg Gallery, is long overdue a monograph. With a new essay by critic and scholar Lyle Rexer, this first chronological retrospective offers due recognition to an outstanding talent and a tribute to New York in all its thrilling, chaotic, and stately glory.

Collector’s Edition signed by Marvin E. Newman
The artist:
Marvin E. Newman (b. 1927) was one of the first recipients of a Master of Science degree in Photography at Chicago’s Institute of Design. A native New Yorker, he shot sports for Life, Look, and Sports Illustrated. His work has been lauded by the likes of Eastman House, MoMA, and the International Center of Photography (ICP).

The editor:
Reuel Golden graduated in politics from the University of Sussex, UK, and is former editor of the British Journal of Photography. His TASCHEN titles include Capitol Records, Andy Warhol. Polaroids, The Rolling Stones, Her Majesty, Football in the 1970s, and the National Geographic editions.

The author:
Lyle Rexer is a New York–based writer, curator, and art critic. He is a contributor to Photograph magazine, and has written for many others including Art in America, Aperture, and Modern Painters. His books include The Edge of Vision: The Rise of Abstraction in Photography and How to Look at Outsider Art. A Rhodes scholar, he serves on the faculty at School of Visual Arts in New York City.
#fotografia