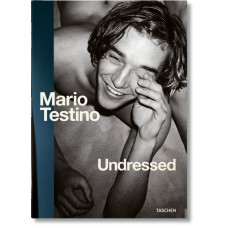 Mario Testino’s Undressed removes various layers. Coinciding with an exhibition conceived exclusively for the Helmut Newton Foundation in Berlin, this intimate series explores the notion of undressing in photography as much as it lays Testino’s archive bare, probing beyond the photographer’s established public image to reveal a deeper understanding of his practice and oeuvre.
The 50 featured photographs center on the naked body, alternately exploring and pushing the traditions and boundaries between sex, gender identity, and fashion. Honoring the influence of Helmut Newton, the images become abstracted body landscapes, the protagonists appearing as mere form, a torso, even a statue.
A special highlight are previously unseen photographs shot in the Testino studio, in which an exuberant atmosphere intermingles with the implicit frisson of nudity and where playfully amorous dynamics never slip into the obscene or pornographic.
Testino’s lineup ranges from supermodel protagonists, such as Kate Moss and Amber Valletta, to anonymous, androgynous men; from individual portraits to group photos. We see many intimate moments, some caught candidly, some consciously orchestrated, such as a young man shaving a woman’s upper pubic hair in a luxurious bathroom. Following in the tradition of SIR, many of the images may be seen to redefine masculine paradigms in the same way that Newton created his own brand of female beauty.
As emotions, aesthetics, and bodies meet, Testino grants new insight into his world-famous work. The images are accompanied by an introduction from curator Matthias Harder, a candid conversation piece with Carine Roitfeld, as well as an essay from psychiatrist and psychologist Manfred Spitzer who offers a neuroscientific perspective on our visual perception of bodies and beauty.

“Homage to the man that through the freedom of his images, showed me I could be myself.” — Mario Testino

The photographer:
Peruvian-born Mario Testino OBE is widely regarded as one of the most influential fashion and portrait photographers of our time. With 200 Vogue covers to his name, he travels extensively shooting for Vogue globally and for clients including Chanel, Dolce & Gabbana, Stuart Weitzman and Dove. His solo exhibitions have shown in museums and galleries worldwide, including the National Portrait Gallery, London; and the Museum of Fine Arts, Boston.

The contributing authors:
Matthias Harder is an art historian and chief curator at the Helmut Newton Foundation, Berlin.
Manfred Spitzer is a German psychiatrist, psychologist and neuroscientist, as well as a popular author in the conjunction of all of these fields. He is Medical Director of the Psychiatric University Hospital in Ulm, Germany.
Carine Roitfeld is an influentual fashion journalist, former editor-in-chief of French Vogue, and founder of CR Fashion Book.