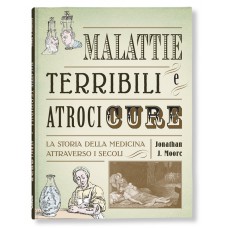 Dreadful Diseases and Terrible Treatments charts humankind’s battle against illness from the Middle Ages to the 20th century. The book covers everything from common complaints to epidemics. Squirming parasites, bursting pustules, rotting limbs, and cascading diarrhea: it’s all depicted here in vivid detail. Sometimes the remedy proved as unbearable as the sickness itself. Whether performing dire dentistry or ice-pick lobotomies, bloodletting or blistering, the medical practitioners of history were ever inventive, if not effective. In these pages, you will find some of the most ill-advised cures in the annals of medical history: from lancets and leeches to bed rest and fecal remedies.
Disease played a role in shaping human history: read how measles and smallpox hastened the decline of the native peoples of the Americas, and how typhus helped to defeat Napoleon. Extraordinary anecdotes abound, such as the cautionary tale of Typhoid Mary and how a cow called Blossom saved the day. Packed with startling medical illustrations, this morbidly fascinating study of all that ails is bound to grip you from page one and leave you reaching for the disinfectant.

Jonathan J. Moore was educated at Melbourne University, gaining a Bachelor of Education (Arts) majoring in History and English. Since then, he has been teaching and writing for twenty years. He likes to research little-known aspects of history and is particularly interested in Bronze Age Greece and Etruscan Italy.
Jonathan has participated in numerous archaeological digs and enjoys participating in Living History. He is currently a member of units reenacting the American Civil War, the English Civil War, and the Napoleonic period. Jonathan also enjoys war gaming as a hobby and has written feature articles for several publications.
For #logosedizioni, he published Forche, roghi e ghigliottine, Pistole, pugnali e veleni, Malattie terribili e atroci cure e Società segrete e culti oscuri.