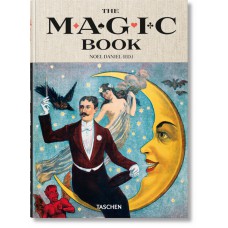 Magic has enchanted humankind for millennia, evoking terror, laughter, shock, and amazement. Once persecuted as heretics and sorcerers, magicians have always been conduits to a parallel universe of limitless possibility—whether invoking spirits, reading minds, or inverting the laws of nature by sleight of hand. Long before science fiction, virtual realities, video games, and the internet, the craft of magic was the most powerful fantasy world man had ever known. As the pioneers of special effects throughout history, magicians have never ceased to mystify us by making the impossible possible.
This book celebrates more than 500 years of the stunning visual culture of the world’s greatest magicians. Featuring more than 850 rarely seen vintage posters, photographs, handbills, and engravings as well as paintings by Hieronymus Bosch and Caravaggio among others, The Magic Book traces the history of magic as a performing art from the 1400s to the 1950s. Combining sensational images with incisive text, the book explores the evolution of the magician’s craft, from medieval street performers to the brilliant stage magicians who gave rise to cinematic special effects; from the 19th century’s Golden Age of Magic to groundbreaking daredevils like Houdini and the early 20th century’s vaudevillians.

“An irresistible tour through centuries of wonder.”
— The Globe and Mail, Toronto

The authors:
Mike Caveney is a writer, collector, professional magician, and the publisher of over 50 books on the theory, practice, and history of magic. His biographical works include Kellar’s Wonders (2003) with Bill Miesel, and Carter the Great (1995). An avid collector and performer for over four decades, he has appeared onstage or on TV in more than 20 countries.
Jim Steinmeyer is the author of many books on magic history and practice, including Los Angeles Times bestseller Hiding the Elephant (2004) and The Glorious Deception (2006). He has created deceptions featured by magicians such as Doug Henning, David Copperfield, and Siegfried and Roy, and critically acclaimed illusions for Broadway hits Mary Poppins, Beauty and the Beast, and Into the Woods.
The contributing author:
Ricky Jay, who has contributed the introduction to this book, is one of the world's great sleight of hand artists, and a distinguished actor, historian, and best-selling author. His Learned Pigs & Fireproof Women and Jay’s Journal of Anomalies were both New York Times "Notable Books of the Year," and he defined the terms of his art for The Cambridge Guide to American Theatre and Encyclopedia Britannica.
The editor:
Noel Daniel is a graduate of Princeton University and a former Fulbright Scholar to Berlin. She earned an MA in London and was director of a photography gallery before editing books. Her TASCHEN publications include East of the Sun and West of the Moon, The Fairy Tales of the Brothers Grimm, The Fairy Tales of Hans Christian Andersen, Wintertime Tales, Magic, and The Circus.