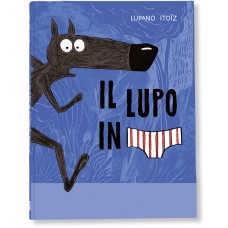 On a cliff overlooking the forest lives the wolf. His howls give you chills, his fur is bristly, his snout is long, his fangs are pointed and his look is deadly. His wrongdoings are told on the first pages of every newspaper. But, fortunately, the other animals have taken the right measures: anti-wolf alarms, traps and fences are sold everywhere and karate classes are held to defend against him specifically. And, thanks to the anti-wolf brigade, the people of the forest can sleep easy! Suddenly, a cry of alarm echoes among the trees: here he comes! Panic spreads everywhere and the terrified animals run away in their burrows. Yet… what they see before them is not the fearful beast they had imagined: it has no deadly look at all! But above all, how can you be afraid of a wolf wearing pants?
Halfway between comic and illustrated book, this volume is the first of four books devoted to the nicest and most harmless of wolves. With a witty text and amusing detailed images, it intends to help children deal with fear and at the same time makes adults reflect on the wicked mechanisms of societies, which tend to find their raison d’être in identifying a common enemy.

Wilfrid Lupano was born in 1972 in Nantes, France. He spent most of his childhood in Pau, surrounded by his parent’s comics, although his unrestrained imagination and his passion for writing come from having assiduously played role-playing games. Afterwards, while he was working as a bartender to pay for his studies, he met Roland Pignault and Fred Campoy, with whom he realized the comic book series Little Big Joe, a humoristic western first published in 2001. With Virginie Augustin he published Aim le tanneur, a fantasy tale in four volumes he ended in 2009. His career was then established and many other titles followed, among which the series Les Vieux Fourneaux, with Paul Cauuet, of which he also signed the script of the film adaptation. From 2016, he is collaborating to the series Il lupo in mutanda (Le loupe en slip).

Mayana Itoïz was born in 1978 in Bayonne, France. After graduating in Fine Art, she moved to Pau in 2007, where she started off as an illustrator collaborating with the publishing house Les P’tits bérets. In 2010 she illustrated a biography of Henry IV written by Christian Desplat for Cairn. As an illustrator she collaborates with the publishing houses Fleurus, Auzou Talents Hauts and Gléant and she contributes to the making of documentaries, comics, illustrated books, teaching materials and stationery. She invented the character of the wolf in his pants to reassure her son who was afraid of wolves. This character made its first appearance in the series Les Vieux Fourneaux by Paul Cauuet and Wilfrid Lupano, and then became the protagonist of a series of its own, first published in 2016. Together with Wilfrid Lupano, in 2015 she embarked on a humanitarian project, The Ink Link: an association of comics professionals who sustain the activities of ONGs from all over the world through their art. At the same time, she continues to publish books for children, among which Maman, published by Seuil, for which she realized both text and illustrations.