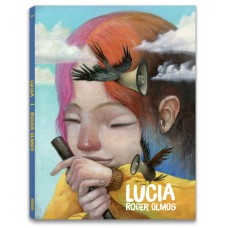 Lucia is a little girl who, like any other child of her age, wakes up every morning, gets up, washes herself, has breakfast and leaves for school. But, unlike her little friends, and everybody else around her, on her daily journey, on the bus, walking through the park and besides other people, she experiences an explosion of colours and emotions – both romantic and grotesque – that create images from sounds, smells... Lucia sees and lives in a world that every child should know, where feelings take on a leading role in a spontaneous and natural way, without any kind of conditioning. In Lucia’s world there is no tyranny of aesthetics, nor of ready-made images. Everything takes shape and is transformed once again, freely. This is an invitation to close our eyes and look around with different eyes, maybe those of the heart.

Lucia is the second volume of the CBM #logosedizioni series, following Blind by Lorenzo Mattotti. The series precisely aims to open a window to the world of disability and diversity, and to arouse empathy through the principle of inclusion. It is a series addressed to children – and not only children –aiming to show meaningful realities to and through their eyes.