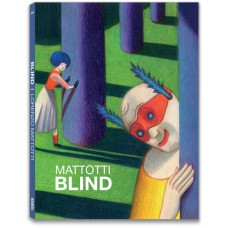 From darkness to light. From black to colour. From blindness to hope... Such is the challenge that every day CBM Italia Onlus aims to face with a smile, the challenge that Lorenzo Mattotti interprets in this book, leading the reader first into the darkness and then into a playful and joyous, but above all coloured world. A run through green meadows, under a blue sky, in complete freedom, to discover an imaginary and marvellous world. A dream. A possibility. A hope.
This is the first book of the CBM #logosedizioni series. Born from the desire to raise public awareness on the theme of disability and in particular of blindness, through a medium – drawing – comprehensible to everybody and above all to people of all ages, the series aims to change the common perception of disability – quite too often associated with the ugly and flawed –through the beauty of art.
CBM is the biggest Humanitarian International Organisation involved in the prevention and treatment of blindness and disability in the Southern Countries. CBM Italia Onlus is part of CBM (Christian Blind Mission), an organisation founded in 1908 composed by 11 national associations – Australia, Canada, Germany, Great Britain, Ireland, Italy, Kenya, New Zealand, South Africa, Switzerland and USA – working together to support different projects and interventions in the medical, educational and development fields to give sight and life to millions of people in the Southern Countries (www.cbmitalia.org).

Part of the proceeds from the sales will go to CBM Italia Onlus in support of its projects to fight blindness in the Southern Countries.