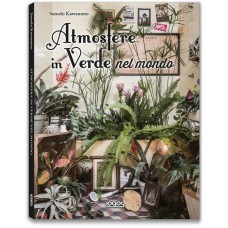 The third volume of the Atmosfere in verde series by renowned garden stylist and plant artist Satoshi Kawamoto, who is always devoted to spreading his particular Weltanschauung in order to develop other people’s sensitivity. As the author himself warns in the preface, this book is different from the first two volumes, as it reflects his new projects and interests, which constantly evolve just like a city landscape. The book offers plenty of ideas to decorate modern apartments with plants and to make the most of even the smallest places in order to cultivate one’s personal relationship with nature. It also presents Kawamoto’s recent works in Japan, Taiwan, and New York in collaboration with shops, apparel brands, galleries, event venues and so on. Through a wealth of photos, an interview with Satoshi and an introduction to his Green Fingers shops located in several cities across Japan and in New York, this book is a great source of inspiration for the readers who wish to make their daily life a little greener.

“I don’t believe there are other artists with such a strong conceptuality and the same ability to balance their own works.” - Emiri Watanabe, TV personality and creator of Plage

“This book perfectly encompasses Satoshi Kawamoto’s style, which is utterly beyond the idea of ‘fad’.” - Motofumi “Poggy” Koki, general manager of United Arrows and Sons

Satoshi Kawamoto is a well-known garden stylist who tries to blend the charm and beauty of plants with the transformations of the passing time. Satoshi doesn’t just work with plants, he ranges through different genres in the six shops he owns and runs in Japan and the last one he recently opened in New York, and in the displays he creates for several magazines, shops and department stores. He also deals with wedding decoration through the brand Forque, as well as with expositions and temporary installations.
His books for #logosedizioni are Atmosfere in verde and Atmosfere in verde a New York.