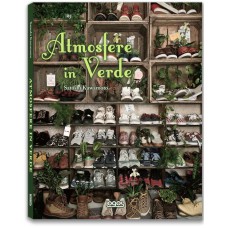 Kawamoto’s “green style”
A small single-storey house in Tokyo’s suburbs reflects the particular Weltanschauung of Satoshi Kawamoto, a well-known designer and garden stylist. He refurbished the house by himself, trying to create a place where the passing of time becomes imperceptible, with a perfect harmony between the interior and the exterior of the house, both modelled by the succession of days and seasons.
From the author’s preface: “From 1997 […] garden styling and design have modelled my personal vision of the world and the way I live, including my taste for the interior design and the food and dishes I prefer. In this book I have intentionally chosen a lot of examples of garden design and interior decoration, in order to share my style and my vision. Anyway I don’t expect that the reader will understand this book as a whole; I’d really be glad if he could accept the little part of it that more suits his way of being”. Satoshi Kawamoto
Thanks to Satoshi’s guidance, the reader will discover the various rooms of his original Tokyo house, admiring also the smallest and only apparently fortuitous, when not “shabby”, details, in a place where the Japanese concept of nuke-kan describes a feeling or a sensation of apparent disorder or  carelessness which on the contrary is intentionally refined. In the second chapter, Satoshi offers several tips for the interior decoration to those people who don’t feel at ease when they have to choose a plant for a particular room, and he invites the reader not to rush, and to take into consideration even only a tiny idea, a tip, the fist step toward the construction of a personal vision of green spaces inside the house. In the third chapter, plants become the protagonists of the Japanese concept of omotenashi that describes a way of treating, of receiving a guest at the highest levels, with no economy and with the purpose of pleasing and pampering the guest. In the last chapter, three shops with a strong personality express Satoshi Kawamoto’s Weltanschauung.

The author:
Satoshi Kawamoto is a well-known garden stylist, trying to blend the charm and the beauty of plants with the transformations of the passing time. Satoshi not only works with plants but he ranges through different genres in the 4 shops he owns and runs and in the displays he creates for several magazines or other shops and department stores. He also deals with the decoration of wedding parties through the brand FORQUE.