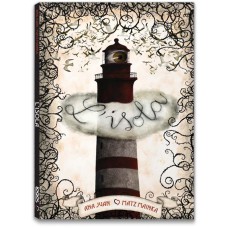 A gothic fairy tale without redemption

“Once upon a time, there was an island in the North Sea,
whose only inhabitants were the lighthouse keeper and his family.”

The second volume of the Spaccacuore (Heartbreaker) series start sas a faily tale, and like Sorelle (Sisters) and Promesse (Promises) it takes us to a far away, timeless, world where men have to come to terms with their own obsessions and their own solitude, and it exacerbates the delirium of passion to the extreme.

In order to alleviate the hardships of living at the mercy of the elements on a deserted island the lighthouse keeper takes refuge in alcohol and ends up falling desperately falling in love with a beautiful creature figment of his alcoholic hallucinations. Naked, fleeting and vanishing like a puff of smoke, the voluptuous intruder creeps into the everyday family life of the man to distort it with her disturbing presence; her bushy and flowing hair remind us of the two little sisters of the volume of the same name, while her red eyes seem to reflect those of the man, made hollow by alcohol.

In the delirium of passion, obsessed by the bewitching presence of a voluptuous body and a charming gaze, the man won’t stop until he satisfies his desire, “until one day the beautiful woman disappeared from his life and his dreams.”

This tale written by Matz Mainka and illustrated by Ana Juan, transposes the ravings of a lost and lonely man into a gothic universe (the lighthouse, a nature lashed by wind and rain, a stormy sea, black birds), leaving no room for redemption. The dark tones are punctuated by rare points of light and the disturbing presences of black flocks of birds and swarms of red-eyed rabbits are the omen of a dark future.

The illustrator:
Ana Juan is a Spanish illustrator, author and painter. Born in Valencia in 1961, she moved to Madrid in the early 1980s. She exhibits her works and publishes her books all over the world – Spain, United States, Japan. Well acknowledged for her original, melancholic, romantic and sometimes merciless interpretation of reality and its stories, Ana has illustrated several covers for the New Yorker, editorials for El País and the covers of many novels by Isabel Allende and others classics of the world literature.