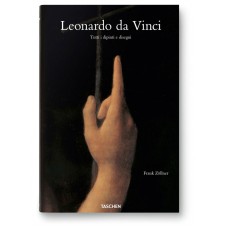 Leonardo da Vinci (1452-1519) possessed one of the greatest minds of all time; his importance and influence are inestimable. This XXL-format comprehensive survey is the most complete book ever made on the subject of this Italian painter, sculptor, architect, engineer, scientist and all-around genius. With huge, full-bleed details of Leonardo’s masterworks, this highly original publication allows the reader to inspect the subtlest facets of his brushstrokes.

* Part I explores Leonardo’s life and work in ten chapters, drawing upon his letters, contracts, diary entries, and writings. All of his paintings are presented and interpreted in depth, with The Annunciation and The Last Supper featured on large double-spreads.
* Part II comprises a catalogue raisonné of Leonardo’s paintings, which covers all of his surviving and lost painted works and includes texts describing their states of preservation. Each and every painting that can be justifiably attributed to Leonardo is included here; thanks to new findings and scientific research, this is the first time his definitive painting oeuvre is being published.
* Part III contains an extensive catalogue of his drawings (numbering in the thousands, they cannot all be reproduced in one book); 663 are presented, arranged by category (architecture, technical, anatomical, figures, proportion, cartography, etc). Over half of the drawings included were provided by Windsor Castle, marking the first time that the Castle has allowed a publisher to reproduce so many of their drawings.

This new edition discusses the most recent findings of Leonardo scholarship and debates controversial new attributions. It also contains new images showing the spectacular restoration of Leonardo’s Virgin of the Rocks in the National Gallery, London, his Virgin and Child with St Anne, in the Louvre, Paris, and the Mona Lisa in the Prado, Madrid.

This sumptuous TASCHEN offering is the most thorough and beautifully produced Leonardo book ever published.

The authors:
Johannes Nathan studied art history at New York University and the Courtauld Institute of Art in London, where he earned his Ph.D. in 1995 with a dissertation on the working methods of Leonardo da Vinci. He has taught at New York University and at the universities of Berne, Leipzig and Cologne. He is the author of a range of publications on art and works as an art dealer and freelance art historian in Berlin.

Frank Zöllner wrote his doctoral thesis on motifs originating from Antiquity in the history of art and architecture of the Medieval and Renaissance periods (1987). He is also the author of a post-doctoral treatise on motion and expression in the art of Leonardo da Vinci, published in 2010. He has published numerous works on Renaissance art and art theory, and on 20th-century art. Since 1996 he has been Professor of Medieval and Modern Art at the University of Leipzig. For TASCHEN he has authored the XL monographs on Leonardo da Vinci and Michelangelo.