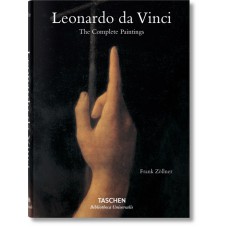 Da Vinci in Detail
The paintings of the Renaissance genius

Leonardo da Vinci (1452-1519) possessed one of the greatest minds of all time; his importance and influence are inestimable. He was painter, sculptor, architect, engineer, scientist and all-around genius. This handy-format edition focuses on the paintings of this Italian artist. With full-bleed details of Leonardo’s masterworks, the book allows the reader to inspect the subtlest facets of his brushstrokes.
We explore Leonardo’s life and work in ten chapters, drawing upon his letters, contracts, diary entries, and writings. All of his paintings are presented and interpreted in depth, with The Annunciation and The Last Supper featured on double-spreads. The second half of the book comprises a catalogue raisonné of Leonardo’s paintings. It covers all his surviving and lost painted works and includes texts describing their states of preservation. Each and every painting that can be justifiably attributed to Leonardo is included here; thanks to new findings and scientific research, this is the first time his definitive painting oeuvre is being published. Together with the volume on Leonardo's Graphic Work in our Bibliotheca universalis the complete work of Leonardo is brought to the reader.