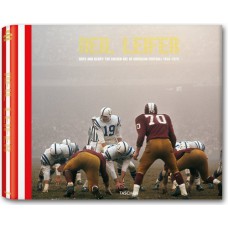 No pain, no gain
The most memorable moments since the birth of pro football in America

The best of sports photographer Neil Leifer’s 10,000 rolls of football pictures, including hundreds of previously unpublished images. Presented in a custom slipcase and limited to a total of 1,500 copies signed by the photographer, this Collector’s Edition is a companion to Neil Leifer’s instant sell-out success, Ballet in the Dirt: The Golden Age of Baseball, published by TASCHEN in 2007.

In 1958, sports photographer Neil Leifer took the picture that remains one of his most famous to this day. The day he got the shot - Alan Ameche’s game-winning “Sudden Death” touchdown - was Leifer’s 16th birthday. This game, called “The Greatest Ever Played,” signaled football’s emergence as America’s new national pastime; formerly half-empty stadiums welcomed sold-out crowds seemingly overnight, while football surpassed pro baseball and college football in national television ratings. Starting then, on any given Sunday Leifer was most likely shooting a football game somewhere in America. His 1961 photo of legendary Giants quarterback Y.A. Tittle dropping back to pass landed Leifer his first cover for Sports Illustrated and cemented his close connection to the sport.

While best known for his iconic photograph of Muhammad Ali towering over a fallen Sonny Liston, and for the enormous diversity of subjects he covered in and out of the sports world, it is his football pictures Leifer considers his best. This collection represents the best of his best, culled from over 10,000 rolls of film on the sport, including hundreds of previously unpublished pictures. It’s impossible to conceive of Peyton Manning hovering over an impromptu wood fire on the sidelines during a blizzard, but Leifer captured Tittle’s Giants doing exactly that during the coldest game in his living memory (the 1962 Championship in New York, a game “far colder than the famous Ice Bowl”). From Vince Lombardi’s Green Bay Packers dynasty to the Miami Dolphins’ perfect season in 1972 to the Minnesota Vikings’ terrifying Front Four - the “Purple People Eaters” - they’re all here.

Following an introduction assembled from the best football columns of the era by famed sports columnist Jim Murray, this collection is divided into four chapters: “On Any Sunday” is Leifer’s homage to the game. “The Legends” includes heroes like Johnny Unitas, Jim Brown, Terry Bradshaw, Joe Namath, Dick Butkus, Frank Gifford, and “Mean” Joe Greene. “The Bosses” delves into the victories on and off the field of immortal coaches Vince Lombardi, John Madden, Tom Landry, Weeb Ewbank, and others. Finally, “The Big Game” traces major championship games from 1958 through Super Bowl XII. The indepth captions put the images into their historical context, making the book highly accessible and informative.

The photographer:
Native New Yorker Neil Leifer began photographing sports events as a teenager. Over 160 of his pictures have appeared on the cover of Sports Illustrated and over 40 of his photographs have graced the cover of Time. He has published 15 books, and was one of two principal photographers in TASCHEN’s tribute to Muhammad Ali, GOAT—Greatest Of All Time and the illustrated edition of Norman Mailer’s The Fight.

The contributing authors:
Jim Murray was a founding father of Sports Illustrated, and sports columnist for the Los Angeles Times for 37 years. Murray was inducted into Cooperstown’s Baseball Hall of Fame writers’ wing in 1988 and won a Pulitzer Prize for Commentary in 1990. He died in 1998.
Sports authority Gabriel Schechter, is the author of five books, most recently This Bad Day in Yankees History.