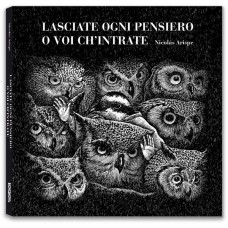 It’s a journey, this new book by Nicolás Arispe. The journey of a bird-woman through space, time and countless references. A journey through a dream (or better a nightmare) and among the fears of modern men. As she opens her eyes, the bird-woman finds herself surrounded by a pulsing crowd of owls that push her and don’t let her move. Who are they? Where is she? New scene: the bird-woman enters the chimney stack of a factory, and she gets out only to enter a painting by De Chirico. All of a sudden, she falls and sinks deep into the sea, among scary creatures with sharp teeth that seem about to devour her. Then come dark caves, witches, evil dark birds, devils and disturbing inquisitors, the inhabitants of a suffocating, distressing world from which we are eager to escape with the bird-woman.
With his refined and unique black and white style, the author leads us into a dreamlike atmosphere, evoked by the owls (nocturnal animals par excellence), by De Chirico’s works and by animals coming from Medieval bestiaries. In the nightmare of the bird-woman, Arispe materializes our contemporary reality, made of exploitation (from the chimney stack to the the fields where you work with your head in a noose), marginalization (the owls scorning the woman-bird), guilt, social stigma (a witches’ sabbath that seems to come straight out of a Medieval treaty) and anxiety about the time inexorably passing (Harpies).
All this is conveyed through a game of references and quotes, which draws from the most different sources: from Medieval bestiaries and treaties to Metaphysical art, from Bergman and Eisenstein to Grünewald, Goya and Millet, up to the theatre costumes designed by Malevič. There is also a small reference to Il libro Sacro and, of course, to the Garden of Bomarzo from which the book takes its title.
Tortured by anguish, chased by a multitude of horrifying beings reminiscent of the Medieval representations of the temptations of the saints, caught between monsters that do not let her go, the bird(-woman) finally finds herself in her nest. She’s woken up from her nightmare… and what about us?

Nicolás Arispe was born in 1978 in Buenos Aires and studied at the Instituto Universitario Nacional del Arte (IUNA). As an artist, he has worked for a few magazines and fanzines and has made CD covers and storyboards for animation movies. As an illustrator he has worked with several Argentinian publishers and his comic strips have been published on several magazines, including Suda Mery K!. He is also a teacher. His books for #logosedizioni are: La madre e la morte / La perdita (2016), Il Libro sacro (2017), Lasciate ogni pensiero voi ch'intrate (2018), Tutti contenti (2019), Atti della gloriosa compagnia dei martiri (2019), Lungo è il cammino (2019) and El árbol (2020).