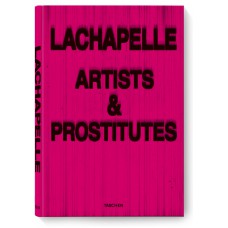 The Fellini of photography
Limited edition of 2,500 copies worldwide, numbered and signed by David LaChapelle!

Who is the greatest star of star photography? It’s the inimitable David LaChapelle, the photographer whose singular style is perfectly unmistakable. He has photographed personalities as diverse as Tupac Shakur, Madonna, Amanda Lepore, Eminem, Philip Johnson, Lance Armstrong, Pamela Anderson, Lil’ Kim, Uma Thurman, Elizabeth Taylor, David Beckham, Paris Hilton, Leonardo DiCaprio, Hillary Clinton, Muhammad Ali, and Britney Spears, to name just a few. Once called the Fellini of photography, LaChapelle has worked for the most prestigious international publications and has been the subject of exhibitions in both commercial galleries and leading public institutions around the world.

Celebrating the visionary LaChapelle`s truly extraordinary photography, this 698-page, XL-sized book is packed cover-to-cover with vibrant full-bleed images; the best of his entire career to date. Bursting at the seams with spectacle and drama, and saturated with colors that only LaChapelle can realize, this limited edition pays tribute to the most daring and ambitious photographer in the history of portraiture.

All color illustrations are color-separated and reproduced in Pan4C, the finest reproduction technique available today, which provides unequalled intensity and color range.

The artist:
David LaChapelle was offered his first professional job by Andy Warhol to shoot forInterview magazine. Since then his work has been exhibited in galleries and museums worldwide, including Tony Shafrazi Gallery and Deitch Projects in New York, and London's Barbican. His images have appeared in countless magazines includingVogue Italia, French Vogue, Vanity Fair, Rolling Stone and i-D. In recent years he has expanded into music videos, live theatrical events and documentary film-making.