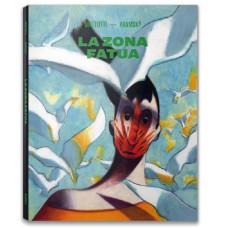 In an undefined landscape, where an oppressive sky overlooks a windswept meadow, two small rubber puppets welcome the protagonist of the story, a man whose face is marked by a red spot that sometimes flares up burning his skin. A mark of sadness according to Zafran, the sinister fisherman of deer fish, or of nostalgia, in the opinion of a sweet and sensual woman with jet black hair and a red dress. The man has been running all night long until he has reached that “fatuous zone of consciousness in which the world is only a reverberation of our sleep“ and it is Fritz and Hans, the two rubber puppets, who give him a name: Sottovoce (murmur). In their company the man starts to explore the Zone, an undefined place, a ghost territory where the ubiquitous wind bends trees and blades of grass, makes the sea ripple, opens windows. The wind creates tension in a landscape that always seems on the point of dissolving, like Sottovoce, who is constantly besieged by the desire to disappear, falling asleep in the earth, plunging in the water, vanishing into thin air.

In the Zone, the melancholy traveler – one of the outcasts that have always fascinated Mattotti – moves through a dreamlike scenario inhabited by surreal creatures, in which his memories emerge from time to time: a comic book he once used to read, a puppet he threw away as a child, the records he used to listen to and the park he loved to visit. The world from which he wanted to escape reappears: once again he sees the laboratory where research was carried out on his spot, he recalls the water games with his brother, he finds himself in his childhood home tenderly watching his mother sleep. Each story is marked by a sense of loss, feared and coveted at the same time, until the man finds an answer and the spot on his face disappears.

Published for the first time as a series of episodes in the Dolce Vita magazine in 1987, La zona fatua is a sequence of visual poems that evoke as many dreams, a series of adventures without resolution and open to new developments. The images with vivid colors and nervous strokes by Mattotti, who aimed at exploring the relationship between painting and comics, welcome Jerry Kramsky’s evocative texts, pervaded by a lyrical atmosphere and a sense of suspension. An enigmatic and suggestive story, a journey into a dream world punctuated by continuous departures, through which the authors, at the time in their thirties, narrate their farewell to adolescence.

Published as a volume for the first time in Italy in 1993 by Granata Press, La zona fatua (The fatuous zone) is reprinted by #logosedizioni g as the fifth chapter of a project revisiting Mattotti’s artistic experience as a comic strip artist. With the publication of Ghirlanda , winner of the Gran Guinigi Award 2017, Mattotti was back to comics after almost fifteen years. To celebrate this return, #logosedizioni launched this collection in March 2018 with L'uomo alla finestra, (The Man at the Window), followed by Stigmate, Caboto, and Lettere da un tempo lontano (Letters from a distant time). The sixth title, Il signor Spartaco (Mr Spartaco) will be published in spring 2020, followed by Labirinti (Labyrinths), Chimera, and Doctor Nefasto. These volumes are presented with a new layout and in a larger format, accompanied by unpublished contents.

Fabrizio Ostani, aka Jerry Kramsky, met Lorenzo Mattotti when they were students and worked with him as a scriptwriter before Mattotti started working on solo projects. Their long-lasting friendship has given birth to many comic books: Labyrinthes and Murmure (English edition: Murmur, Penguin, 1993), published by Albin Michel in 1988 and 1989, Doctor Nefasto (Granata, 1991), and Docteur Jekyll & Mister Hyde (Casterman, 2002; English edition: Dr. Jekyll & Mr. Hyde, NBM Publishing, 2003), as well as various children’s books, such as Grands Dieux (Seuil Jeunesse, 1997), The Cranky Sun (Little Brown & Co, 1996), and Il mistero delle antiche creature (Orecchio Acerbo, 2007). In 2007 he worked at the screenplay for the animated feature film Fear(s) of the Dark, again in collaboration with Mattotti. He worked with illustrator Gabriella Giandelli at some episodes of the animated series Milo, produced by Gertie, and at the illustrated book Il bambino notturno (Orecchio Acerbo, 2005). He wrote and illustrated the children’s books Quando SuperTrippa cercò di conquistare la terra (Gallucci, 2007) and La stanza delle ombre malvagie (Gallucci, 2010). With Lorenzo Mattotti, in 2017 he published Ghirlanda (#logosedizioni), winner of the Gran Guinigi prize.
His books for #logosedizioni are: Ghirlanda and La zona fatua.