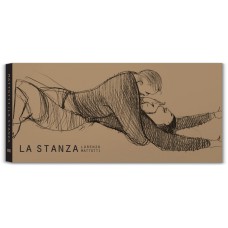 Lorenzo Mattotti’s room is an uncertain place, with bare walls, where minimal and essential details sporadically emerge on the surface: the headboard, a pillow, the corner marking the encounter between walls, a square that could be a painting or a window, chess patterns, maybe the patchwork cover, maybe the tiled floor. The room could fit in any place, in any time, and all we can see is just a narrow portion developing on the horizontal space, the portion tightly surrounding the bodies of two supine lovers. Zooming in and constantly changing perspective, the lens allows the observer to spy on them from a close distance. Actually, the room is not a physical space in which the two lovers interact, but the abstract space that marks the boundaries of their love, that defines it and protect it. It’s the shelter hiding them from reality, probably from their own lives, keeping them afloat in a parallel dimension where they exist only for each other. They could be two young people at their first experiences, two secret lovers or a long-lasting couple still keeping their love alive or meeting for the last time: we don’t know anything about them, and this allows us to easily identify ourselves with them and let our imagination run loose. Sketched with fast strokes, the man and the woman in this book of pencil drawings are almost stylized, while all the attention is focused on their gestures. Page after page, the scene proceeds in slow motion. Filling the atmosphere with tenderness and, at the same time, desire, Mattotti turns down the opportunity to capture the sexual act, preferring to linger on those moments which immediately precede or follow it, the moments when the two lovers, with the clothes still on, or partially undressed, look into each other’s eyes, brush gently the skin, exchange whispered words and caresses, gradually explore each other’s bodies. We watch as a true grammar of love comes to life, brightened by the constant changing of perspective and the unevenness of the strokes, which may appear straight and sharp, in a playful mix of light and dark, or become faint and thin, to mimic light effects. You can flip through the pages of this notebook, again and again, taking your time, or you can run quickly through the scenes, watching as the figures animate with a cinematic effect, with that empty page after each table that resonates as an invitation to be creative, draw something yourself, write down a message, leave a mark.