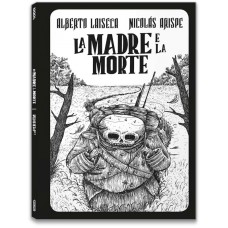 “We shouldn’t lie to children; they should know that the world is frightful, we can’t do otherwise. Fear helps you to grow up not only in literature, but also in life.” – Alberto Laiseca

In this double book, two esteemed Latin American storytellers –Argentinian and Mexican, respectively – deal with courage and delicacy with the theme of the sacrifice that a mother is willing to make in order to oppose a tragic and irreversible event: the death of her son. In La madre e la morte Alberto Laiseca re-elaborates a little known story by Hans Christian Andersen showing a mother who reclaims the child stolen from her by Death. To get her son back she goes through rivers, woods and mountains without caring for what she has to deprive herself of along the way. La perdita by Alberto Chimal deals with a mother who has lost her son during a terrible earthquake; unable to accept his death, she prays the gods to give him back to her, but they decide to grant her wish in their own way. Both stories, mid-way between classical tragedy and oral tradition, oblige us to confront our deepest fears so that we can cope with the inevitability of destiny and Death, a terrible and dreadful presence that we are nevertheless obliged to live with, and which we can exorcise only through art. It’s Nicolás Arispe who places the two stories in the same narrative universe made of skulls, disturbing presences and macabre atmospheres by means of his detailed and highly symbolic black and white illustrations, which suggest an interpretation that goes beyond words.

Alberto Chimal (1970) is a Mexican writer. In 2013 he was finalist of the Premio Internacional de Novela Rómulo Gallegos (Venezuela), one of the most prestigious prizes for Spanish-language fiction. He also teaches literary courses and workshops and is Professor of comparative literature at the Universidad Nacional Autónoma de México.

Alberto Laiseca (1941–2016) was born in Rosario (Argentina). Long-time consultant for the publisher Letra Buena, he was  the author of the novels Su turno para morir (1976), Aventuras de un novelista atonal (1982), El jardín de las máquinas parlantes (1993) and of the grand saga Los Soria (Simurg, 1998, Boris Vian Prize), a legendary story which was unpublished for 16 years. He also published a collection of short stories, Matando enanos a garrotazos (1982), the book of poetry Poemas chinos (1987) and the essay Por favor, ¡plágienme! (1991). His stories, set in fantasy worlds where imagination seems to have no boundaries, brought him the admiration of many writers, critics and readers.

Nicolás Arispe was born in 1978 in Buenos Aires. As an artist, he has worked for a few magazines and fanzines and has made CD covers and storyboards for animation movies. As an illustrator he has worked with several Argentinian publishers and his comic strips have been published on several magazines, including Suda Mery K!. He is also a teacher.
His books for #logosedizioni are: La madre e la morte / La perdita (2016), Il Libro sacro (2017), Lasciate ogni pensiero voi ch'intrate (2018), Tutti contenti (2019), Atti della gloriosa compagnia dei martiri (2019), Lungo è il cammino (2019) and El árbol (2020).