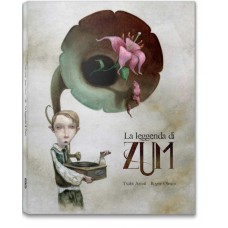 The valiant explorer Sir John Stubborn has an ambition to reach the furthest corner of the world and there build a village similar to his native Aum.
Having failed to fulfil his dream, he leaves a legacy to his descendants who, as stubborn as he was, continue the family tradition in the effort to reach the furthest corner of the world.
Until one day Sophie, his fifth great granddaughter comes out of a very dense fog, finally reaching the furthest place on earth, where she founds a village that she names Zum.
Created after such a long and dangerous journey, the village cannot but be magic. Every five years, during the first evening of spring, a thick fog comes down and covers the entire village…

The text by Txabi Arnal, ranging from irony to the sweetest participation, takes us to a far away land, to an atmosphere typical of old legends and fairy tales. Roger Olmos’ illustrations perfectly match this kind of narration, which they enrich and complete, suggesting even wider scenarios… while page after page we find ourselves entangled in a fog which gets thicker and anthropomorphic, a fog that covers everything, from the roofs of the houses to their inhabitants’ hearts.

The author:
Javier Ignacio Arnal Gil, “Txabi”, teaches Children’s Literature at the Faculty of Language education and literature at the UPV-EHU, Escuela Universitaria de Magisterio de Vitoria-Gasteiz, and has been a Primary school teacher for 10 years.
In 2011 he completed his doctoral thesis on the theme of death in illustrated books for children, and now he teaches and writes books – mainly for children – both in Basque and in Spanish.
He has published some twenty books, among which: La Ladrona de Sellos, Edelvives, 2014; Nicolás, Edebé, 2012; El rompecabezas, OQO, 2012; Caja de cartón, OQO, 2010, White Ravens selection 2011, and selected by the Banco del Libro de Venezuela as one of the best books for children published in Hispanic America in 2010; Cuore di sarto, OQO/Logos, 2011, Premio Vittoria Samarelli 2012.

“When I was a child I was fascinated by the illustrated books my father used to keep in his studio, which I found more interesting than the ones he use to buy for me. Those pictures are engraved in my mind and always will be, in such a strong way that the personal imaginary I have been developing since then has always been shrouded in those unusual atmospheres. This is also what I’m trying to do with my works: to recreate those early stimuli that trained me ‘imagemotionally’ also on the other things.” - Roger Olmos

A JOURNEY IN THE PHANTASMAGORICAL GARDEN OF APPARITIO ALBINUS (GB)
18.00€
Add to Cart