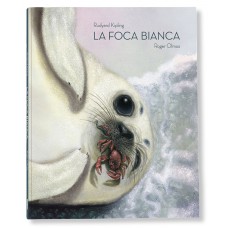 “Oh! hush thee, my baby, the night is behind us, / And black are the waters that sparkled so green. The moon, o’er the combers, looks downward to find us / Asleep in the arms of the slow-swinging seas!”
This lullaby is the opening of the story of Kotick, the son of Matkah and Sea Catch born on the beach of Novastoshnah, crowded with male seals fiercely fighting to find a place for their family. The newborn puppy is all head and shoulders, with pale, watery blue eyes, as tiny seals must be, but there is something quite unusual about his coat. There has never been a seal like Kotick in the world: he is a white seal! Lovingly cared for by his mother, the puppy has a happy childhood in Novastoshnah, playing with his mates and gradually familiarizing himself with water until he becomes an excellent swimmer. As he grows up getting to know the gifts and dangers of the sea, we discover that it is not just the white fur that makes him special: Kotick is a rebel and is willing to do anything to make his dreams come true. After witnessing a slaughter of seals at the hands of some men, he starts tirelessly looking for a place where he and his mates can live in harmony and tranquility. A place where no human being has ever set foot. This story by Rudyard Kipling, taken from one of his most acclaimed novels, The Jungle Book, is now published in a new translation and enhanced by the powerful and magnificent oil illustrations by Roger Olmos that bring Kipling’s words back to life turning them into a true colourful adventure!
A timeless classic, the adventure of a white seal determined to fight for the good of his colony, but also the story of a son who stands up against tradition and his father’s will in order to pursue his dreams. A story of love and courage for the young people who will change our future.

“I am a convinced animal activist and Kotick teaches us to believe and fight for our own paradise. Tradition is not always right, times change and can change for better or for worse, but we, small white seals that inhabit the earth, must observe and think, also with our heart, and then decide what we want to do and who we want to be. We can change our destiny just like Kotick, who saved his family and the seal people from the men who used to take puppies to the slaughter every year.”
– Roger Olmos

Books published by #logosedizioni: Calando, La capra matta, La cosa che fa più male al mondo, Cosimo, La leggenda di Zum, Rompicapo, Seguimi! (una storia d’amore che non ha niente di strano), Senzaparole (book and portfolio), The Story of the Good Little Boy / The Story of the Bad Little Boy (also available in Italian and Spanish), Una storia piena di lupi, Stop, Amigos, La Zanzara, Lucia, Lo struffallocero blu, La foca bianca (also available in Special Edition) and Grindadráp.
Joseph Rudyard Kipling was born in Bombay, India, on December 30, 1865, to English parents. At the age of six he was sent with his sister to Southsea, England, where he lived with a family of distant relatives, the Holloways, and attended a Puritan school receiving a traditional English education. The distance from his parents and the strict and violent methods of the Holloways threw the boy into a state of profound prostration and undermined his health, until his mother, in 1877, decided to enroll him at the United Service College of Westward Ho (Devonshire), attended by the children of soldiers and officials on duty. Here he spent four years receiving a strict education which included corporal punishment and at the same time discovered his talent for writing. In 1882 he returned to India, where he began his apprenticeship for the Civil and Military Gazette and published his first collection of poems. In 1887 he became deputy editor of The Pioneer, India’s most important newspaper, and moved to the city of Allahabad, where the newspaper’s office was located. The following year his career as a writer began with the publication of the collections of short stories Plain Tales From the Hills (1888), The Phantom Rickshaw, Soldiers Three, The Story of the Gadsbys and In Black and White. In 1889 he started a long journey through Japan and the United States, and finally arrived in London where he was warmly welcomed. In 1891 he stopped writing because of health problems. On medical advice he traveled by sea for six months through America, Africa, Australia and New Zealand until, in January 1892, he returned to London where he married Caroline Starr Balestrier and shortly afterwards published the collection of poems Barrack-Room Ballads. His popularity was skyrocketing. In the same year he moved to Vermont, in the United States, where he remained for four years and had two daughters: Josephine, who would die at the age of seven, and Elsie. In later years he devoted himself to an intense literary activity and published The Jungle Book (1894), The Second Jungle Book (1895), and the poetry collection The Seven Seas (1896). In 1897 he returned to England with his family and settled in Rottingdean, near Brighton, where his son John was born. In the same year he published Captains Courageous, followed by The Day’s Work (1898) and The White Man’s Burden (1899). In 1900, at the outbreak of the Anglo-Boer war, he left for South Africa as a war correspondent, an experience from which he drew inspiration for the novel Kim (1901), considered by many to be his masterpiece. After the war, he lived in South Africa until 1908, working both as a journalist and a writer and during those years he published Just So Stories for Little Children (1902), The Five Nations (1903), Traffics and Discoveries (1904) and Puck of Pook’s Hills (1906). In 1907 he was awarded the Nobel Prize for Literature. Later he returned to England where was involved in the work of the conservative party for about five years and in the meantime published Actions and Reactions (1909) and Rewards and Fairies (1910). At the outbreak of WWI, he returned to his post of war correspondent and in the conflict he lost his son John, enlisted as a volunteer and reported missing in 1915. Subsequently he published A Diversity of Creatures (1917), The Years Between (1919) and Debits and Credits (1926). Rudyard Kipling died suddenly on January 18, 1936 in London. His autobiography, Something of myself, for my friends known and unknown, was published posthumously, the following year.