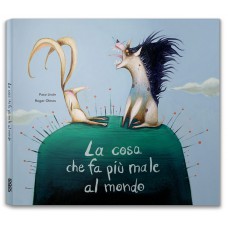 The thing that hurts most in the world
A colourful, ironic, intense tale

As they go fishing, the hare and the hyena speak about everyday matters. “Do you know what’s the thing that hurts most in the world?” asks the hare.
“It’s the lie” he says, as the hyena bursts out laughing: a lie can’t hurt more than a bite on the paw!
To show his point, the hare leaves a very special po… pomegranate? potato? “pie” at the gates of the palace, which will of course provoke the king’s fury and rage. Later on, with the flies’ complicity – experts in all types of smells – he will start the hunt to the culprit among all the animals of the village, in a tale in which the moral (which so much pleases mums) is reached through a funny text and the hilarious illustrations (which so much please children of all ages) by Roger Olmos.
The hare’s idea – that the thing that hurts most in the world is lie – is demonstrated in a fantastic and entertaining story that will make the reader laugh, but also think.
The text is based on a traditional Ivorian tale. For centuries, in many populous areas of Africa, tales were the first schooling for many children. Although every area has its own particular style of approaching stories, traditional African tales, full of symbolic content, treasure ancestral knowledge and wisdom and they are a common means to expound cosmological and philosophical meditations about life and forgotten values, to try to educate and guide individuals and, as in this case, to convey teachings.
The hyena, which in this tale takes on the hypocritical and contemptible nature of some humans, will experiment first hand the taste of lie, far bitter than the physical pain he so much feared at the beginning of the story.
The illustrations by Roger Olmos give life to expressive and hyperbolic characters full of humour. With a precise and sharp line, he gives his personal view of a story that, through an amusing writing exercise, brings us closer to the words, thoughts and cultural inheritance of the Ivory Coast.
Special mention With Ravens 2006
Special mention Premio Llibreter de Álbum Ilustrado 2006