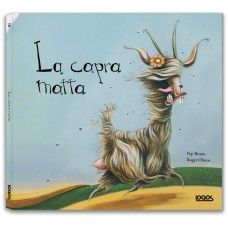 After looking all over the village, Miguel found his nanny goat on a roof top. “Does she think she’s a weather vane? Does she think she’s a chimney? Perhaps a cat?" Miguel asked himself. With the help of a few flowers, a story book and a handfull of salt (nanny goats like salt more than children like ice cream), the silly nanny goat went back to where it belonged.
The writer tells us, remembering his childhood, that in the village there were two or three nanny goats to a house. Early in the morning, when the children were on their way to school they took their goats and left them with the goatherd in the square. The goatherd went into the hills and the children went to school.
At the end of the day the children collected their nanny goats -although more than one went to the pen. That way, the nanny goat went back home with its belly full, ready to give milk, and the children with their heads full of what they had learnt at school.
The silly nanny goat -or wise nanny goat- stems from the observation and knowledge of the countryside, constituting an indirect formula for observing and understanding the realistic and fantastic side of things.
Miguel’s nanny goat isn’t with the goatherd now. Perhaps it’s in the pen... Miguel looks all over for it, till he finds it where he would never think of looking. The adventure ends with a comical and unsuspected twist which the illustrations support.
Using essential oral narrative resources (onomatopoeia, dialogues, repetitions...), Pep Bruno comes up with an ideal story to tell to the even smallest of the family before going off to sleep. A story with an essential text, backed up both by the narrative and visual aspect.
Roger Olmos presents very efficient images with scenes, guiding the action and assimilating the spatial concepts that mark the narrative rhythm. The drawings, dynamic and absurd, exude stimulating and comic details for the imagination, which turn the Silly Nanny Goat into a book which may also attract older readers.