KAY NIELSEN’S A THOUSAND AND ONE NIGHTS 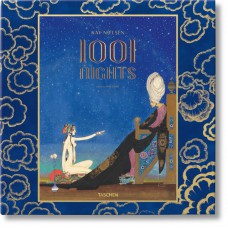 In the late 1910s, in a Europe ravaged by World War I, Danish illustrator Kay Nielsen put the finishing touches on his illustrations of A Thousand and One Nights. The results are considered masterpieces of early 20th-century illustration: bursting with sumptuous colors of deep blues, reds, and gold leaf, and evoking all the magic of this legendary collection of Indo-Persian and Arabic folktales, compiled between the 8th and 13th centuries.
In the financially strapped postwar climate, however, publishers retreated from Nielsen's project and the publication never happened. A rising star, Nielsen moved on to other work, and the spectacular pen, ink, and watercolor images of this world heritage classic remained under lock and key for 40 years. Published just once in the 1970s, the illustrations were rescued from oblivion after Nielsen’s death in 1957 and are now held by the UCLA Grunwald Center for the Graphic Arts at the Hammer Museum in Los Angeles, the Art Institute of Chicago, and in two private collections.
Published for the first time ever in five colors including gold, this unique presentation of fine art prints revives all 21 strikingly beautiful illustrations reproduced directly from Nielsen’s original watercolors−the only complete set of his beloved illustrations to have survived. Each illustration is presented individually in an extra-large format and on fine art paper, allowing Nielsen’s graphic mastery and rich array of influences, from Art Nouveau to Japanese woodcuts to Indian painting, to dazzle.
The set also includes a 144-page hardcover book also printed in five colors, featuring descriptions of all of the images, and three generously illustrated essays on the making of this series, the origin of Nielsen’s unique imagery, and a history of the tales. In addition, the accompanying book features many unpublished or rarely seen artworks by Nielsen, as well as all 23 of the incredibly intricate black-and-white drawings Nielsen also created for the original publication. This is a rare chance to own exceptional reproductions of this highly-influential artist's only surviving complete set of watercolors.

Limited and numbered edition of 5,000 copies

The illustrator:
Danish artist Kay Nielsen (1886−1957) remains one of the most fascinating and beloved artists of the Golden Age of fantasy illustrations in the early 20th century. His books include East of the Sun and West of the Moon (1914), as well as Hans Christian Andersen’s Fairy Tales (1924) and Hansel and Gretel and Other Stories by the Brothers Grimm (1925), both featured in TASCHEN fairy-tale books. Nielsen also worked on the Disney film Fantasia (1940), designing the segment “Night on Bald Mountain.” Not long after a hopeful but ill-fated stint at chicken farming, he eventually died penniless and in obscurity.

The editor:
TASCHEN editor Noel Daniel is a graduate of Princeton University and a former Fulbright Scholar to Berlin. She earned a master’s degree in London and served as director of a photography art gallery before becoming a book editor. Her TASCHEN books to date include A Treasury of Wintertime Tales (2014), Le fiabe di Hans Christian Andersen (2013), Le fiabe dei fratelli Grimm (2011), Magic 1400s–1950s (2009) and The Circus 1870s–1950s (2008).

The contributors:
Cynthia Burlingham has been Deputy Director of Curatorial Affairs at the Hammer Museum in Los Angeles since 2011. She is also the director of the UCLA Grunwald Center for the Graphic Arts, a position she assumed in 2005 after holding various curatorial positions at the Grunwald Center. She has curated numerous exhibitions and has lectured and written extensively on the history of prints and drawings from the 16th through the 20th century.

British art historian Colin White specializes in early-20th-century illustration, including the work of golden age legends Edmund Dulac, Jessie M. King, Thomas Mackenzie, and Kay Nielsen. His published works include biographies of Dulac and King, a forthcoming biography of Nielsen, and an essay in TASCHEN’s East of the Sun and West of the Moon (2015). He has also written on sentimentality in art, Edward Ardizzone, and W. B. Yeats.