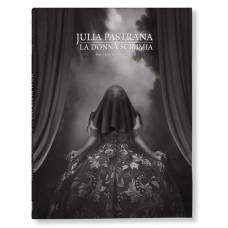 A coach jerking among the dust, a village fading away, nestled between the mountains, the gaze of a little girl looking for a greeting, a gesture of affection from the mother who has just sold her. Julia’s story begins with this farewell. “She is a perfect woman — a rational creature, endowed with speech, which no monster has ever possessed. She is therefore a Hybrid, wherein the nature of woman predominates over the brute — the Ourang Outang. Altogether she is the most extraordinary being of the day.” This is the diagnosis of the doctor who first visits Julia Pastrana. She was a native Mexican woman who lived in the Nineteenth Century and soon became a celebrity thanks to her talents as a singer and dancer but above all to her unusual appearance. What can’t be found in documentary sources is the flow of her feelings, the point of view from which she looks at her own destiny. We can only imagine all this, and Ivan Cenzi does it with his usual delicacy and profoundness, entrusting Julia’s thoughts to a diary that continues even after her death. From her unhappy childhood in Ocoroni to the years she spent in the city of Sinaloa, where she receives an education and learns to dance, to the acclaimed tours around the world, Julia retraces her life and focuses on the meeting that will change her forever: the one with Theodore Lent, her manager and husband, who whispers in her ear the words she will never forget: “You have the right to be happy”. If Julia’s kind heart clearly emerges from the pages of her diary, the refined black-and-white images by Marco Palena, made using mixed media (graphite, charcoal, pastels and digital) show us her appearance, like vintage photographs, focusing on the contrast between her wild features and polite manners. We cannot help being charmed by this fragile and gentle creature, while we realize who the real monsters are, abject people willing to use other human beings for the sole purpose of getting rich. An intense and controversial love story, an invitation to respect diversity, and above all an extraordinary portrait of a woman.

Ivan Cenzi is an explorer of the uncanny and collector of curiosities. Since 2009 he has been the editor of #BizzarroBazar, a blog that deals with anything weird, macabre and marvellous, which in a short time has become the Italian landmark for this kind of topics. Over the years #BizzarroBazar has been dealing with wunderkammer, anthropology of death, museums and anatomical collections, history of the circus and travelling fairs, the early days of science, classical and modern art, alternative sexuality and in general anything at the outskirts of culture. He combines his work as a writer, editor and blogger with and intense work as a lecturer and collaborates with international museums and universities. From 2019, he is a lecturer for the master in Death Studies and for the degree course in Psychology of end-of-life relations at the University of Padua. He has contributed to various newspapers, written several foreword contributions for contemporary art publications and organized cultural events.

Marco Palena was born in Atessa, in the province of Chieti, and lives in Pescara. He studied at an art school and then attended the Faculty of Architecture. Later he began to take an interest in illustration for children, soon gaining approval and appreciation in various competitions. He was selected for the 2011 and 2012 editions of the “Rights in colors” competition and won third place in the international competition “Disegni al sole” (Drawings in the Sun) in 2012. The following year he won the prize for the best-illustrated book in the category 4-7 years at the 14th international competition “Syria Poletti: On the wings of the Butterflies” and the Illustramente first prize. In 2016 he won the competition launched by #logosedizioni for the “Librerie in fiore” poster. In 2017 he won the Golden Award (Advertising Category) by Annual and the World Illustration Awards in two categories: Overall Winner New Talent and New Talent Winner (Advertising Category).
The jury of Annual awarded him the Toppi Award for the work Blind in 2018 and the Silver Award in the Publishing Category for the illustration The Baron in the Trees in 2019, both created for ILLUSTRATI magazine by #logosedizioni.