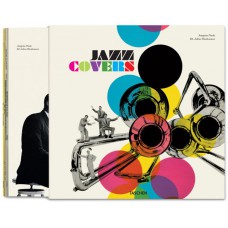 This volume features a broad selection of jazz record covers, from the 1940s through the decline of LP production in the early 1990s. Each cover is accompanied by a fact sheet listing performer and album name, art director, photographer, illustrator, year, label, and more.
Special features for jazz lovers include a top-10 favorite records list by leading jazz DJs such as King Britt, Michael McFadden, Gilles Peterson, Andre Torres, and Rainer Trüby, as well as interviews with legendary jazz personalities Rudy Van Gelder (sound engineer who recorded for many labels such as Blue Note, Impulse!, and Prestige), Creed Taylor (founder of many labels and one of the best jazz producers ever, credited also for bringing bossa nova to the US and fusing it with jazz), Michael Cuscuna (Blue Note jazz producer and catalog researcher, responsible for its most successful re-editions), Bob Ciano (designer at the CTI Label, founded in the 70s by Creed Taylor, and one of the greatest cover designers ever), Fred Cohen, (the owner of New York’s Jazz Record Center store with an encyclopedic knowledge of jazz music), and Ashley Kahn (writer, critic, and journalist for jazz whose books include A Love Supreme, Kind of Blue, and The House That Trane Built).
This new edition features 2 volumes in a slipcase.

The author:
Joaquim Paulo is a consultant for major labels and directs a number of radio stations in Portugal. He started collecting vinyl at 15, and flies to London, Paris, New York and São Paulo to enrich his collection of over 25,000 LPs. He lives and works in Lisbon and dedicates his free time to recovering old and rare recordings.
The editor:
Julius Wiedemann studied graphic design and marketing, and was an art editor for digital and design magazines in Tokyo. His many TASCHEN titles include Illustration Now!, Logo Design and Information Graphics.