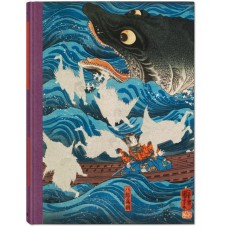 Originating as a practical means of democratizing art ownership in response to a broadening merchant class, Japanese woodcut printing rapidly evolved into a discipline of which there exists no Western equivalent. Spanning from the 17th-century development of ukiyo-e, or “pictures of the floating world,” to the decline and later resurgence of prints in the early 20th century, the images collected in this edition stand as an unmatched record of the shifting mores and cultural development of Japan. From famous masters like Katsushika Hokusai, whose Under the Wave off Kanagawa is arguably the single most well known piece of Japanese art, to more obscure printmakers, we encounter a range of subjects from the pastoral to the erotic, from the historical to the fantastic—all united by the technical mastery of their creators.

Even the most minimal 17th-century prints of elegant women or everyday landscapes evoke a dramatic range of emotional resonance, with deceptively subtle marks and experimental color palettes. Bold, expressive lines effortlessly trace the folds of a gown, as swathes of color dissolve into white and back into fierce pinks on the frontiers of a sunset. As print technologies advanced, so too did the complexity and popularity of the prints themselves, the mid 19th century boasting some of the most spectacular examples of woodblock printmaking in history. Coupled with the forced opening of Japan’s ports by the US in the mid 18th century, this era of peak print production comprises not only some of the most technically refined depictions of genre scenes and Kabuki actors, but further catalogues the fascination and apprehension held towards the beginning of a new era in Japan history. After a brief downturn in production and popularity, the medium experienced a resurgence of formal innovation in the early to mid 20th century, with prints taking on a broader range of subject matter and a more expressionistic tone.

Brilliantly reproduced in XXL resolution, this edition compiles over 200 woodblock prints—and with them, three centuries of Japanese history. Through stunning foldouts of large-scale triptychs, and extensive contextual notes detailing individual prints and the overall development of the movement, discover the works that so influenced Claude Monet, Vincent van Gogh, and countless others who have taken in the splendor that is Japanese woodblock printmaking.

“I envy the Japanese for the enormous clarity that pervades their work... they draw a figure with a few well-chosen lines as if it were as effortless as buttoning up one’s waistcoat.”
— Vincent van Gogh

The author:
Andreas Marks studied East Asian Art History at the University of Bonn and obtained his PhD in Japanese studies from Leiden University with a thesis on 19th-century actor prints. From 2008 to 2013 he was director and chief curator of the Clark Center for Japanese Art in Hanford, California, and since 2013 has been Mary Griggs Burke Curator of Japanese and Korean Art, Japanese and Korean Art Department Head, and director of the Clark Center for Japanese Art at the Minneapolis Institute of Art.