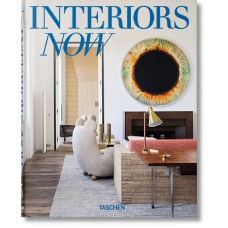 A successful home is the perfect synthesis of personality and zeitgeist; it is a living work of art, a cultural artifact, and the object of ceaseless curiosity. Highly sensitive to this phenomenon, our Interiors Now series tracks the constantly evolving and multifaceted fabric of contemporary interior design around the world. Each new volume—destined for casual readers and professionals alike—assembles a fresh and inspiring collection of recently created residences that demonstrates how to bring out the best in the space that matters most: your home.

Whether it is photographers Inez van Lamsweerde & Vinoodh Matadin’s New York loft with its Eames 2.0 alder expanses and cozy corners, Jacques Grange’s relaxed romance for Francis Ford Coppola’s palazzo in Southern Italy, or the apartment of a young art collector couple in Mumbai—all the projects have been chosen as expressions of personal vision that together give the full picture of what really counts in interior decoration right now.

The editor:
A native Austrian, Margit J. Mayer started her journalism career in 1983 at WIENER magazine in Vienna. Focusing early on style and contemporary culture, she wrote and edited for major German magazines like MännerVogue, Vogue, GQ, ELLE, and Stern. As editor in chief of AD Architectural Digest Germany from 2000 to 2011, Mayer and her team chronicled the rise of “New Berlin” with its close ties to the art scene. After establishing TASCHEN‘s Berlin office in 2011, she contributed to TASCHEN Magazine and, until summer 2013, headed the publishing house’s Style & Travel section.
The author:
Ian Phillips was born in Middlesbrough, England—the birthplace of Captain Cook—and studied modern languages at Cambridge. Having lived in Paris for more than 20 years, his current apartment on the Left Bank is in a building once inhabited by Antoine de Saint-Exupéry‛s wife. He has been editor-at-large for the German edition of AD Architectural Digest for many years and is a regular contributor to Interior Design, Architectural Digest US, and Elle Decor.