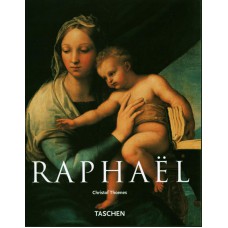 Influenced by his contemporaries Michelangelo and Leonardo, Raphael Santi (1483-1520) became, in his own right, one of the most important artists of the High Renaissance. Though Raphael painted many important works in his Florence period, including his famous Madonnas, it was his mature work in Rome that cemented his place in history, most notably the Stanza della Segnatura in the Vatican featuring his School of Athens and Triumph of Religion murals. This overview traces the life`s work of this Renaissance master who achieved the height of greatness in only two decades of creation and whose influential work paved the way for the Mannerist and Baroque movements.
The author:
Christof Thoenes studied art history in Berlin and Pavia, before completing his doctorate in Berlin. Thoenes was Honorary Professor in Hamburg and now lives in Rome, where for many years he has worked for the Bibliotheca Hertziana (Max-Planck-Institute). He has contributed to numerous publications on Italian art, particularly on architecture and architectural theory of the 15th to 18th centuries.
About the Series:
Each book in TASCHEN’s Basic Art Series features: