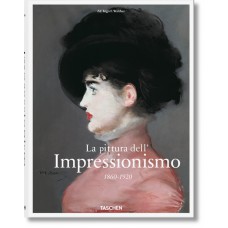 It was a dappled and daubed harbor scene that gave Impressionism its name. When Impression, Sunrise by Claude Monet was exhibited in April 1874, critics seized upon the work’s title and its loose stylistic rendering of light and motion upon water to deride this new, impressionistic, tendency in art.
As with many seminal art movements, the critics got their comeuppance. Today, Impressionism is close contender for the world’s favorite period of painting. With blockbuster exhibitions, record-breaking auction prices, and packed museums, the works once dismissed as unfinished or imprecise are now beloved for their atmospheric evocation of time and place, as well as the stylistic flair of rapid brushstrokes upon canvas.
Despite its popularity and a whole host of publications, many areas and artists of Impressionism remain inadequately researched. This TASCHEN book fills the gap, raising the profile of unjustly neglected pioneers such as Berthe Morisot, Lucien Pissarro, and Gustave Caillebotte, while exploring the characteristics of Impressionism, from painting en plein air to vivid color contrasts, not only in the movement’s native France but also across the rest of Europe and North America.

The editor:
Ingo F. Walther (1940–2007) was born in Berlin and studied medieval studies, literature, and art history in Frankfurt am Main and Munich. He published numerous books on the art of the Middle Ages and of the 19th and 20th centuries. Walther’s many titles for TASCHEN include Vincent van Gogh, Pablo Picasso, Art of the 20th Century and Codices Illustres.