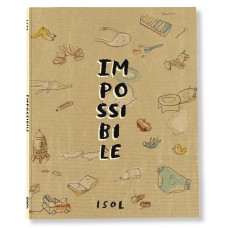 Toribio is two and a half years old and his parents love him very much, but some days looking after him seems like an impossible mission. When the evening comes, they are exhausted and dream of the day when he will stop throwing a tantrum for a bath, for lunch, for a nap, the day when everything will be easier and they will go back to having a life of their own, sleep at night and eat undisturbed. One day, leafing through the newspaper, they find an advertisement that fills them with hope: Signora Meridiana promises to solve any kind of problem ("There is always a solution"). They decide to make an appointment immediately.

Starting as usual from a daily situation that will be turned upside down in a surprising ending, Isol involves us in a funny story in which text and images complement each other to tell the different phases that any parent has to face when dealing with a small child full of energy and curiosity. Dedicated to all the anxious and novice parents, an ideal sequel to Nino, Impossibile (Impossible) follows the trend of books on families by the Argentine author, along with Segreto di famiglia (Family secret) and Il palloncino (The balloon). As in Nino, the story is told from the parents' point of view and attention is focused on the world of children, seen as inscrutable aliens in front of whom we often feel inadequate. Fortunately, we are not alone in this journey, as Isol seems to tell us in this new title of the Biblioteca della Ciopi!