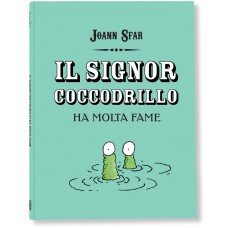 Why is there a crocodile on the bus? Tired of waking up hungry every morning and wondering in the jungle in search of animals to eat, he finally decided to seek fortune in the city. Sure, things don’t go that well at first, because the crocodile is always hungry and he can’t help gobbling up a lot of passengers on the bus. The driver goes ballistic, but the unusual traveller points out that he didn’t make any mess, and he was even careful not to smear the seats. Besides, he’s got a point when he says that, if it’s not allowed to eat on board, there should be a sign! Luckily, a little girl is there to explain to him that it’s not polite to eat people, so everything goes back to normal and the bus can resume its route. Then the crocodile and the girl – whose parents are in prison and who lives with her fascinating but always drunk aunt – become friends, and she explains to him that things in the city work differently than they do in the jungle, and you don’t have to kill anybody to fill up your tummy. You can just go to the supermarket and put everything you like in your shopping cart. But the crocodile is not really convinced…
This is a story about a friendship that is both beautiful and bizarre, a hilarious and witty tale that – under the pretext of accompanying a hungry crocodile in his daily misadventures – encourages us to think about the contradictory mechanisms of our so-called civilized society. Focusing on the confrontation of ideas and the questioning of rules, the book lightly and keenly deals with controversial issues such as consumerism, social conflicts, and prison. We can recognize Sfar’s unique style, characterized by quick and playful strokes, vivid colours, and complex characters who appear hilarious, tender, and biting at the same time.
A charming comic book to be savoured, to the delight of all the readers who are hungry for stories.

The author:
Born in Nizza in 1971, Joann Sfar is a prolific and talented author of comics, who skilfully deals with both drawing and script. In 1994 he published his first comic book, Les Aventures d’Ossour Hyrsidoux, and since 2000 he has achieved growing appreciation from audience and critics alike, winning several prizes. He collaborates with the press, illustrates philosophical classics and has written several comic books, many of which have been translated into Italian. His titles published in English include Klezmer: Tales of the Wild East, Vampire Loves, the six volumes of Sardine in Outer Space, The Professor’s Daughter, The Rabbi’s Cat, Little Vampire, Dungeon and The Little Prince. In 2004 he won the Grand Prix de la ville d’Angoulême, special award for the thirtieth anniversary of the festival. In 2010 he directed the musical Gainsbourg (vie héroïque), adapted from his graphic novel and awarded with three César awards. In 2011 he directed the animation movie Le Chat du Rabbin, an adaptation from his comic book series with the same title and nominated as the best animation movie at the European Film Awards.
Published by #logosedizioni: Piccolo Vampiro 1 (2018), winner of the Andersen Prize 2019 for best comic book, Piccolo Vampiro 2 (2018), Piccolo Vampiro 3 (2019), Gran Vampiro 1 (2018), Gran Vampiro 2 (2019), Merlino, Salciccia e Tartina (2019), Merlino contro Babbo Natale (2019). Soon to be published: Il Signor Coccodrillo ha molta fame (2020).