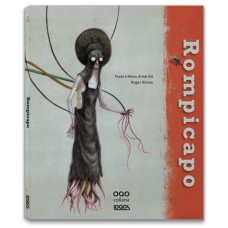 The Jigsaw Man sat in front of the puzzle
and moved the pieces,
adding some,
eliminating some others...
He played with the life of the entire town,
turning joy into pain,
pain into conviction...

From this disturbing situation, brothers Txabi and Manu Arnal Gil take us to the suffocating reality of a terrified village, whose inhabitants live at the mercy of the Jigsaw Man, a cruel tyrant who hardens his heart everyday by drinking a cup of coffee with a spoonful of bile for breakfast.
The jigsaw becomes the appropriate symbol of the absolute despotism that dominates the village (the jigsaw pieces). Its inhabitants are wretched creatures whose plans and projects depend solely on the whims of a superior being, lord and master of their lives, who can rely on a total impunity.
To give life to this wicked being and make us feel the existential anxiety of a subjugated and frightened people, no illustrations could be more appropriate than those created by Roger Olmos, despite the scarcity of information initially available to him, who didn’t receive any physical description of the character. “I love when I have the possibility to start from scratch” says the Catalan illustrator. In this book, he therefore chose to “try something different”, by creating a particular texture and new tones and atmospheres, working with oil and digital retouching.
To represent the negative values embodied by the Jigsaw Man, Roger Olmos opted for black clothes and a face half hidden, “maybe because of a handicap”. He also decided to equip him with tentacles and link him to a mechanical arm that helps him move. “It is a sort of umbilical cord that ties him to his tower, which is part of him” Olmos explains, “like all the beings around him are sort of experiments halfway through the mechanical and the biological, created by himself”.
As for his antagonist, the goat, Olmos found “interesting” that it took shape and increased at each appearance, always accompanied by flies. They are an important presence by his side and, as the artist explains, “Being the animals of death, they are a clear signal”.

Authors and illustrator have given an original contribution to a theme inherent in the human condition that, throughout history, has been often portrayed in literature: the abuse of power. But the story doesn’t end here: the jigsaw pieces come alive to face their tormentor… Il rompicapo makes us aware of the importance of people’s unity and of the existence of a poetic kind of justice.

The author:
Javier Ignacio Arnal Gil, “Txabi”, teaches Children’s Literature at the Faculty of Language education and literature at the UPV-EHU, Escuela Universitaria de Magisterio de Vitoria-Gasteiz, and has been a Primary school teacher for 10 years.
In 2011 he completed his doctoral thesis on the theme of death in illustrated books for children, and now he teaches and writes books – mainly for children – both in Basque and in Spanish.
He has published some twenty books, among which: La Ladrona de Sellos, Edelvives, 2014; Nicolás, Edebé, 2012; El rompecabezas, OQO, 2012; Caja de cartón, OQO, 2010, White Ravens selection 2011, and selected by the Banco del Libro de Venezuela as one of the best books for children published in Hispanic America in 2010; Cuore di sarto, OQO/#logosedizioni, 2011, Premio Vittoria Samarelli 2012.