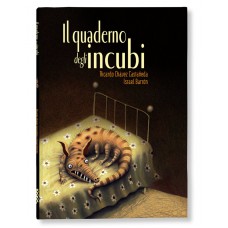 Rich in disturbing and fascinating images, this book is a collection of stories people never tell. These stories don’t need paper or words, they are appalling, silent tales hidden inside ourselves as we close our eyes. They conceal behind the eyelids of children that suffer from a world they cannot understand, because of situations that frighten them.

If children don’t tell these tales to anyone it’s because they have found out there are stories that can’t be told with the words they know. So they keep silent and look, with dismayed eyes. Grown-up people – adults and elder brothers – have called these sort of stories by the name of “nightmares” and decided that they don’t happen in the real world.

Ricardo Chávez Castañeda was born in Mexico City in 1961. Since he was young he started to collect literary prizes, such as, in 1993, the award for the best children’s novel at the Feria Internacional del libro Infantil y Juvenil in Mexico City. He was included in the White Raven 2013 catalogue with El libro que se muere and won the Bolognaragazzi Award for the “New Horizons” category with the collective work Diccionario para amar.

Israel Barrón was born in 1974 in Pachuca, Mexico.
He studied painting at the Faculty of Plastic Arts at the University of Veracruz and in 2007 was invited to an artistic residence in Prokuplje, Serbia.
His works have been exhibited in Mexico, Argentina, Colombia, Peru, Uruguay, Canada, the United States, Japan, Israel, Italy, Serbia, Slovakia and Spain.
He illustrated posters and book covers, and published his works in magazines and Arts sections, in both paper and digital formats. He also designed sceneries and illustrated album covers, and his works were chosen as the official images of many cultural events, including the Afrocaribeño Festival, the National Children's Book Fair of Xalapa and, in 2018, the XXXVIII International Children and Young Adults Book Fair of Mexico City.
In 2013 he was invited to participate in the Sarmede Children’s Illustration International Exhibition called Le immagini della fantasia 31; the following year he contributed to the book Cuentos populares mexicanos, a collection of traditional Mexican tales selected and rewritten by Fabio Morábito, and later included in the White Ravens catalogue of the Internationale Jugendbibliothek of Munich.
He was published by several international publishers, including Fondo de Cultura Económica, Conaculta, Colegio de México, Macmillan-Castillo, SEP, Santillana USA, Panamericana, and #logosedizioni.
Twice a winner of the CANIEM (Cámara Nacional de la Industria Editorial Mexicana) Award for publishing art, in 2017 he received the Gold Plate at the Biennial of Illustration Bratislava. In 2019 he participated as a speaker at FILBo, the Bogotá International Book Fair and at the International Congress of Illustration in Colombia.