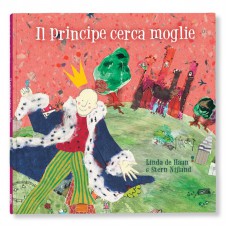 In a beautiful palace, on a mountain high above town, lives a young prince, heir to the throne, with his mother, the Queen, and the Crown Kitty. The queen has ruled for many, many years and can’t wait for her son to marry and take on the crown and all its responsibilities. Unfortunately, however, her offspring isn’t that much interested in marriage or princesses either. Countless suitable brides parade in front of him but none of them seems to find the way to his heart. Until the last princess is announced: princess Madeleine, accompanied by her brother, Lee. Then… unexpectedly… it’s love at first sight! The prince has finally found love and everyone at court prepares for the wedding party…

Originally published in Dutch, this book has been translated into many languages and adapted for the theatre. In 2002, it also earned an honourable mention at Publisher’s Weekly’s “Off-the-Cuff” Awards as “most unusual book of the year”. Available at last in Italian translation, this traditional tale, reinterpreted in a modern and open way, is fun and surprising and every child will be amazed and amused by its final twist. A valuable tool to talk about love and equality and to overcome those prejudices that distance us from each other as human beings.

An important book on the themes of inclusion, of welcoming others and respecting difference. Because love is always the best happy ending to every tale.

The authors:
Linda de Haan and Stern Nijland were both born in 1976 and live in the Netherlands. They met at the Academy of fine arts in Groningen, from which they both graduated in 1998. After that, they founded a studio with other illustrators in a very unusual place: the dressing rooms of a former public swimming pool. In 2000, they wrote and illustrated together their first book, King and King. Linda has been a full-time illustrator ever since, creating illustrated books and drawings for a children tv programme. She also collaborates in various other projects, which include contributions to magazines, books and illustrated novels. Stern continues her career as an author and illustrator in addition to teaching art in an art school and working with elementary school children.