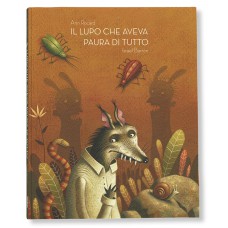 In a dense wood halfway around the world, lives a huge wolf with hairy ears and two fearsome tusks. His name is Garù-Garù and no one has the courage to approach him or talk to him. When he appears on the path that crosses the forest, a general stampede breaks out: the rabbits dive into their burrows, the deers seek refuge in the bushes, the birds fly to the top of the trees and all the animals close their eyes because they are afraid to even see him. And yet, this gigantic wolf is the most frightened of all: he is terrified of snakes, toads... and even snails! But, more than anything else, he is afraid of the dark; so, in the evening, when he goes back to his cave, he never turns off the small lamp next to his bed and always keeps a torch in his pocket, for you never know. Until one night, he is awakened by someone knocking on the door: it’s Noemi, a little girl with blond braids asking for shelter. From this moment, the wolf will never be the same and with Noemi’s help he will be able to overcome all his fears... including his fear of the dark!

This amusing and rhythmical story by Ann Rocard, published for the series la biblioteca della Ciopi (Ciopi’s shelf) and playfully illustrated by Israel Barrón, reinterprets the legendary figure of the werewolf, which has always fascinated writers and filmmakers. The man cursed to turn into a ferocious beast at every full moon here becomes an apparently frightening but actually tender and inoffensive creature. He will not fail to inspire the young ones with some laughter and much, much love!

Ann Rocard (1954-) is a multifaceted creator: writer of books for adults and teenagers, artist, musician, theatrical author. After graduating in child psychogenetics and psychopathology at the University of Paris-Nanterre and specialising in social sciences in Caen, she was an educator for a long time and then a psychologist in a school for mentally ill children and teenagers, working at the same time in a center for children with hearing difficulties. As a writer and theatrical author, she carried out several seminars in schools and universities from the late 1970s, teaching theatre to children and teenagers for over thirty years. She published novels, short stories, poems, songs, theatrical and pedagogical texts. She lives between Brittany and Normandy.

Israel Barrón was born in 1974 in Pachuca, Mexico.
He studied painting at the Faculty of Plastic Arts at the University of Veracruz and in 2007 was invited to an artistic residence in Prokuplje, Serbia.
His works have been exhibited in Mexico, Argentina, Colombia, Peru, Uruguay, Canada, the United States, Japan, Israel, Italy, Serbia, Slovakia and Spain.
He illustrated posters and book covers, and published his works in magazines and Arts sections, in both paper and digital formats. He also designed sceneries and illustrated album covers, and his works were chosen as the official images of many cultural events, including the Afrocaribeño Festival, the National Children's Book Fair of Xalapa and, in 2018, the XXXVIII International Children and Young Adults Book Fair of Mexico City.
In 2013 he was invited to participate in the Sarmede Children’s Illustration International Exhibition called Le immagini della fantasia 31; the following year he contributed to the book Cuentos populares mexicanos, a collection of traditional Mexican tales selected and rewritten by Fabio Morábito, and later included in the White Ravens catalogue of the Internationale Jugendbibliothek of Munich.
He was published by several international publishers, including Fondo de Cultura Económica, Conaculta, Colegio de México, Macmillan-Castillo, SEP, Santillana USA, Panamericana, and #logosedizioni.
Twice a winner of the CANIEM (Cámara Nacional de la Industria Editorial Mexicana) Award for publishing art, in 2017 he received the Gold Plate at the Biennial of Illustration Bratislava. In 2019 he participated as a speaker at FILBo, the Bogotá International Book Fair and at the International Congress of Illustration in Colombia.