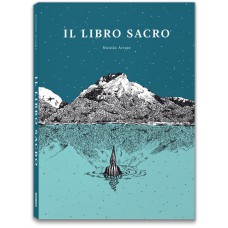 Il Libro sacro reinterprets seven episodes of the Old Testament: the Genesis, the binding of Isaac, the coming of the Avenging Angel, Job’s doubts, the lamentations of Jeremiah, Ezekiel’s prophecies, and Jonah’s punishment. Following the operation undertaken in Pinocchio and Moby Dick with the Leviathan myth, and inspired by his childhood memories of catechism days and by an old bible book for children, Arispe detaches these ancient narrations from time and space, crowding them with half-human and half-animal creatures, to “rethink the dialectics” and condense the power and the universal dimension of the most archaic book in a few black and white sharp scenes. So, in the Genesis, God dresses the part of a solitary engineer in a nuclear plant; Ezekiel reincarnates as a half-Minotaur, half-company manager creature; the binding of Isaac takes place in a desolated group of polar bears; and Jonah is represented as a wolf travelling on a renaissance caravel… Through mixed-up symbols, overturned meanings, and contemporary references, we question our certainties and discover again the poetic and universal dimension of the Old Testament. The refined Indian ink drawings of the Argentinian illustrator, recalling, among the others, the works of William Blake, Robert J. Flaherty and Francisco Salamone, convey a mythological world though which the Bible becomes the interpretation of our modern society.

Nicolás Arispe was born in 1978 in Buenos Aires and studied at the Instituto Universitario Nacional del Arte (IUNA). As an artist, he has worked for a few magazines and fanzines and has made CD covers and storyboards for animation movies. As an illustrator he has worked with several Argentinian publishers and his comic strips have been published on several magazines, including Suda Mery K!. He is also a teacher. His books for #logosedizioni are: La madre e la morte / La perdita, Il Libro sacro.