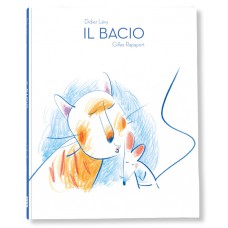 One day, a mouse kisses a cat. The cat, of course, is furious about it and shoos the mouse, threatening to eat him. The mouse slips off into his hole, but the next day, while the cat is talking to a cute kitty, he comes out and kisses him again! Now the cat’s reputation is utterly lost! His friends make fun of him and he becomes their laughing stock. Luckily, the mouse finally understands the gravity of the situation and stops showing up. So, the cat calms down a little. But, after a while, he starts to miss those daily kisses…

When we think about a cat and a mouse, it’s easy to imagine them as sworn enemies and Tom and Jerry’s crazy chase scenes immediately come to mind, with Tom’s physical strength challenged by Jerry’s cunning. But what if this rivalry wasn’t more than a commonplace and a prejudice? Can a cat and a mouse ever be friends?

A possible answer is offered by this charming little book, where Didier Lévy’s lively writing perfectly combines with Gilles Rapaport’s funny and vividly coloured pencil sketches, that imitate children’s drawings. A tender and amusing story about friendship, that teaches us how to overcome prejudices and welcome difference as something enriching. Ultimately, this book pushes us to follow our hearts.

The author:
Didier Lévy was born in 1964 and lives in Paris. He began his career as a journalist but soon started to write books for children, until this became his full-time job. He wrote more than a hundred books and was published by prominent publishing houses such as Sarbacane, Albin Michel, Nathan and L’école des Loisirs. He also is the author of some successful series, among which are Petit Dernier, Elza and the adventures of Angelman. In Italy he published Il popò di Ippopò with Emme edizioni, Come riaccendere un drago spento, Viva la danza! and L’età della ragione with Clichy, and Tuk-Tuk Express with Curci editore. Didier’s work tackles the great issues of life with discretion, tact and a good deal of humour, recreating childhood’s typical spontaneity.

The illustrator:
Gilles Rapaport was born in 1965 and lives and works in Paris. Before he became an author and illustrator, he attended the courses at Union Centrale des Arts Décoratifs. Since then, he has published more than 15 illustrated books for children —some of which deal with difficult themes, such as war or the Holocaust— with some of the most renowned French publishing houses. He also draws comic strips and cartoons for newspapers, magazines, posters and a few companies. With his work, he wants to pass down to children how important it is to be free to express their creativity, so they will become independent thinkers.