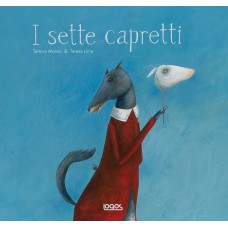 There were once seven little goats that lived happily in a cabin in the woods with their mother; but there was a fierce wolf lurking near by…

A widely spread and traditional story from Grimm’s classic version, a living reference of cultural transmission that feeds the imagination of younger readers and contributes quality to the panorama of children’s literature.

A tale that produces intense emotions, a fantasy that frees us from terror as we are defeated by “implacable wolves”, a suggestion in a symbolic way that brings the little ones face to face with basic conflicts (absence of the mother, the possibility of coming across wicked beings, reaction when faced with adverse circumstances…), helping them to trust in themselves and to advance in their personal maturing process.

The renewed version by Tareixa Alonso is completed with the particular dimensions of the illustrations by Teresa Lima, that provide meanings at distinct levels, with clear characters and a wolf that isn’t lacking in attractiveness, helps the youngest to structure their dreams.

Distinction of the Jury of the Portuguese National Illustration

Text by Tareixa Alonso, from adaptation of Grimm’s classic
Illustrations by Teresa Lima